The Helicopter Transporter is the latest city set to be unveiled and is another addition to the Police sub-theme. With exactly three hundred and eighty two pieces it presents a nice and long transport truck, a new helicopter, a very cute buggy, a green motorcycle, a desert rock with a bush and four mini-figures (two police officer and four bandits).

This transporter is a sort of ‘déjà vu’ of some older releases with long transporter trucks such as the high speed boat or the coast guard helicopter transporter but I guess that is only a minor details because this set looks really huge with a lot of interesting stuff to play with and some original vehicles to add to the city collection. 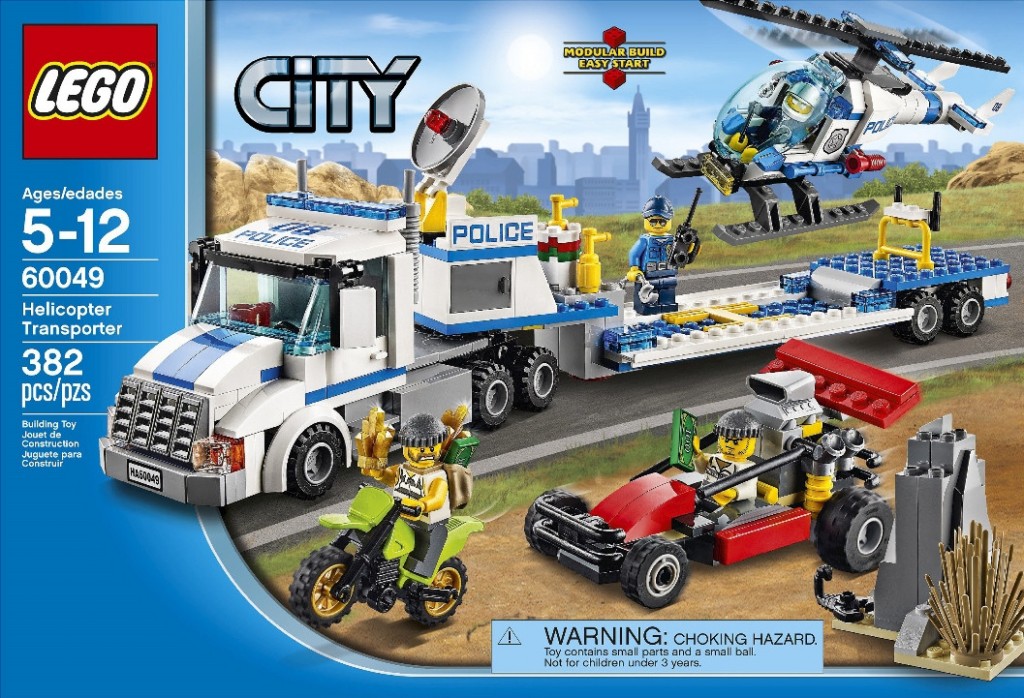 And if we talk about news vehicles, I guess that the most unusual is really the red buggy. With a flat suspension and tires of different sizes, it brings a big and powerful motor with four exhausting pumps and a big air entrance at the back, a wide red aileron with multiple positions and a black strong fender at the front.

Having a look at the truck, despite some new details, its structure is not particularly new. The front makes me remind the 2010 toysrus model with a long hood and a grid made with four small dark grey bricks. The cab looks really nice with a blue windshield and some side doors and inside it brings the usual: space for two guys, the steering wheel and the red coffee cup placed in the dashboard. 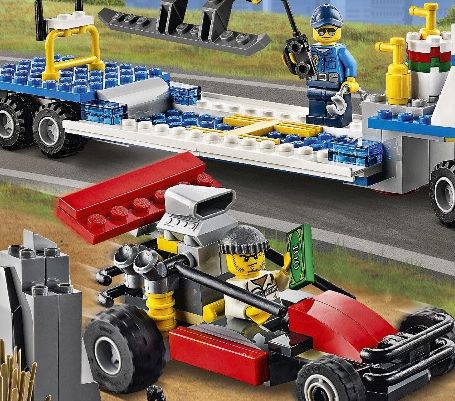 Just behind the cabin is built the usual attaching mechanism that will be used to receive and lock or unlock the big trailer. This one has in the middle, just like in other models, a lowered platform that will transport the police helicopter with all the possible balance and safety. At the front there is space for a couple of small compartments to store a few police tolls and next to them an extinguisher and a small fuel tank. Just like the cab, the trailer has blue emergency lights everywhere and at the back, to provide the best security when in movement, it has a useful support bar for the heli’s tail.

The small Helicopter is a rearranged version of other police aircrafts but this time with some new features. Starting by the back, the tail is built with round 2×2 bricks just like the wood logs, the propeller at the top has only two blades and the cockpit with space for the cop and a couple of handlers brings a new blue windshield. For those who have a police station with heliport but for some reason don’t have the vehicle, this looks a great chance to add one! 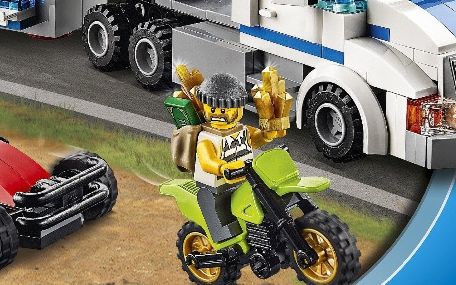 Overall it seems another great option to increase the contingent of police vehicles in the town. In the past years I think that there was no similar police vehicles released which makes this set unique. On the other hand, the long trailer allows for instance to tow other small police vehicles which is excellent in terms of playability. The price is not known yet but looking at the almost four hundred pieces, forty dollars is the most probable value. Enjoy the (few…) pictures!

One thought on “Lego 60049 – Helicopter Transporter”