The new Police Dog Unit set is more than a vehicle. At the same time it is also an idea pointed to the new recent Lego fans. Why am I saying this? Well first of all because as you’ve already seen, it brings something more than just a Police Dog Unit featuring also a small robbers’ hideout and its old van.

On the other hand, definitely this set, being quite pretty, won’t catch the older fans for two obvious reasons: a Police dog unit isn’t something properly new, I can remember at least a couple of them in the past years and on the other hand if we look at the robbers’ hut, we can easily remember of the 2012’robbers hideout (4438) or even this year’s Helicopter Surveillance (60046).

The Police van isn’t also new in terms of aesthetic. This time Lego picked the older Range Rover (from the Dirt Bike Transporter) and transform it into a police vehicle. Having a sturdy look, this vehicle has also a raised suspension, some nice protections all around the chassis and a big engine at the front.

Inside the cab, which unluckily has no doors, there is the usual: a seat for the driver and a steering wheel. Just behind it we might have more fun with the dogs’ compartment. The set brings a couple of nice German shepherd and the van, which has a big back door has more than enough space to transport it. All around the vehicle we can also spot a bunch of different lights, the usual in this type of vehicles. 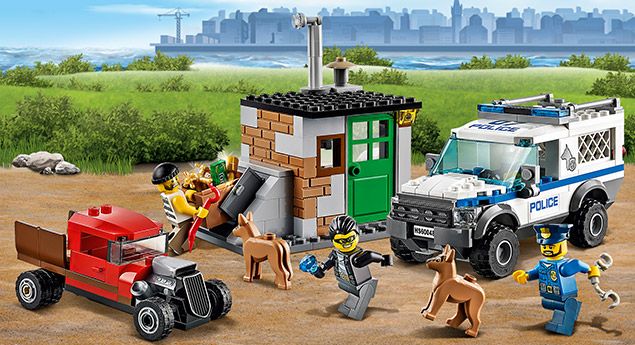 The robbers red Hot Rod, on the other hand, looks quite funny. With a nice engine at the front with a big air entrance and a curious exhaustion pipe, it features a cab with some really nice elements such as the “old” Lego windshield, the side doors that open in opposite direction and just behind them the trunk made with four side bricks which aren’t anything but the usual chair. The back axe also presents a double wheel which looks absolutely great.

Continuing with the small hideout, it is also an element that presents some really nice details. Starting by the small compartment to store the stolen money, passing through the wall built with two different types of pieces and ending in the unusual periscope that the robbers use to watch the area and be alert to the police. 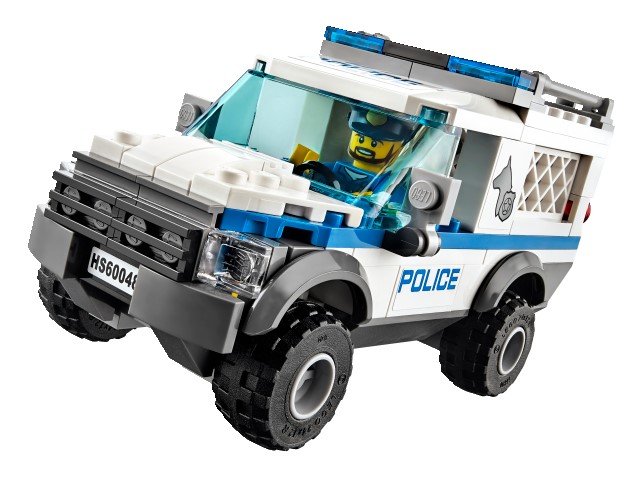 Almost two hundred and fifty pieces that include three mini-figures (a police officer and two crooks), two vehicles and a small building for around thirty bucks are definitely a really nice deal. However there are two cons that have to be considered in this set because they might have big influence when it’s time to buy it: there are already dozens of police vans, being this one just one more and on the other hand, recently, it was release a robbers’ hideout with the same type of scenario. Enjoy the pictures and take your own conclusions!