This is probably the most expected Police set for next year. No matter how many version of Police headquarters have been already released it is always a pleasure to see a new Police Station. I would certainly, just like you, love to see some more details, especially from the interior, but my opinion goes in this direction: simple but very nice!

The set features exactly eight hundred and forty five pieces and brings besides the huge building, an usual Police car, a small red van for the robbers, a police motorcycle, a small helicopter, a brown dog, seven mini-figures (two traditional thieves, their partner, a female officer, two police and the helicopter’s pilot.

At the first glance, this looks a really nice building, quite balanced and with all the requirements for a good working day. There are three clear distinct areas: the office building with two floors and the heliport on top, the cells in the middle, that constitute the tallest part and finally, at the left, a really nice garage with a control tower just next to it. 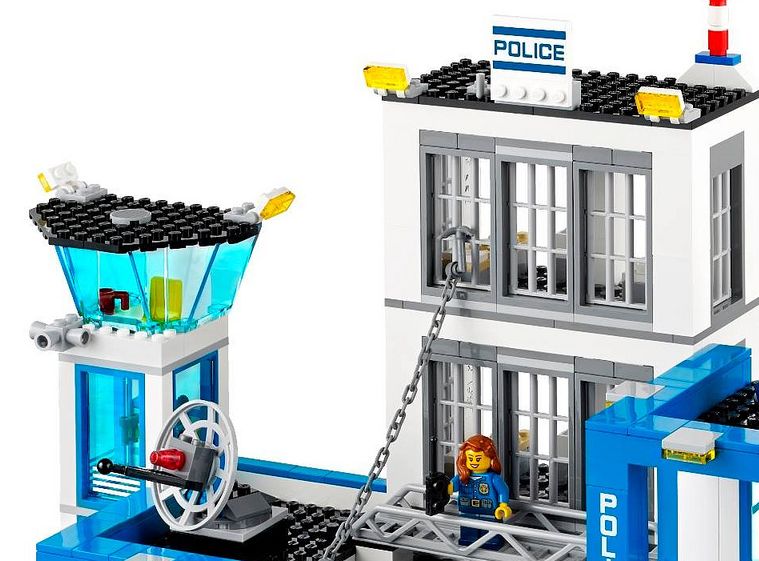 At the right, the blue building has most of all the features that a normal police station presents in all kind of modern cities. The ground floor is, obviously where all the are serviced. And for that we can see a small balcony, a desktop, a coffee machine and even a couple of seats for the users.

At the first floor the case changes radically! An interrogation room with all the necessary tools gives the cops a nice space to question the robbers and solve the crimes. The picture details aren’t very good in this case, but it’s possible to see some lights, a sort of handcuffs’ support and perhaps a small table for the interrogatory. 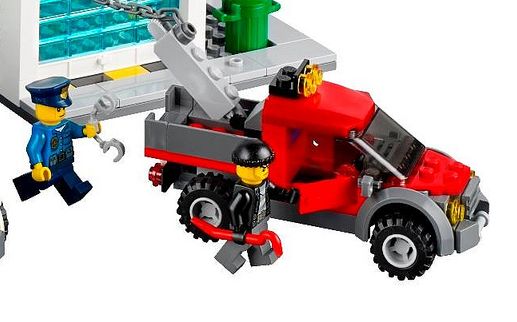 Above, in the roof, the heliport is not very big but looking at it, is possible to see that it will handle quite well not only with this small heli but also with bigger crafts such as for instance the 7741 – police helicopter. The outside of the station is very simple but quite nice at the same time, having a small sidewalk, some grass and even a water pump. 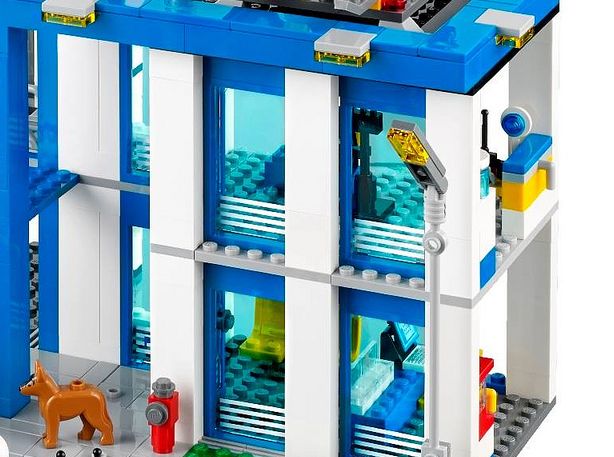 At the opposite corner, the control tower and the garage follow the same blue tendency and feature some really nice details. The garage isn’t much different from the usual, it has a traditional door that goes up and down and in the roof, a new satellite dish ensures all the communications that the station needs. Just next to it, the control tower with three levels is perhaps the part that isn’t so clear for now. The thin structure indicates that there isn’t space for much but on top we can easily see a nice surveillance room with plenty of glass and a nice seat inside.

Finally, as it concerns to the cells, there is definitely a tendency in this Police wave for the thieves’ evasion. In the new Police station the fun begins when the thieves attach a long chain to the cells and pull it with the small van. I don’t know if it is possible with all the three doors or just with one but the idea, despite being utopian, is really very nice in term of playability. The prisons occupy two floors which are basically similar and the cells include a bed and the basic stuff for the prisoners. 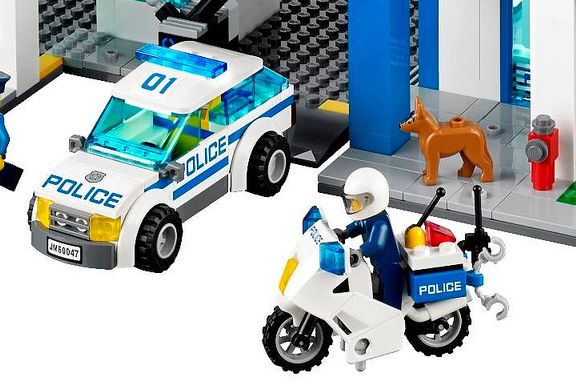 Below the cells, it is placed the entrance for the back of the building. A small control cabin with an usual barrier ensure all the safety and control for a conditioned entry where only the Police has access. The available space upon the grey plates isn’t much but I guess that with careful, a few additional Police vehicles can be easily parked.

Having a look to the vehicles, with the exception of the Helicopter, the other three are quite familiar, especially the ones from the Police. The motorcycle despite the yellow antenna and the handcuff support at the back is exactly the same for years, as well as the Police car that appears in several Police sets. The robbers small van on the other hand no matter being the same for instance of the 2013’ set 60009 (Helicopter Arrest), is in my opinion pretty nice, balanced and with some great features such as the spot light on top, the nice trunk at the back and the small clip at the grid’s front. 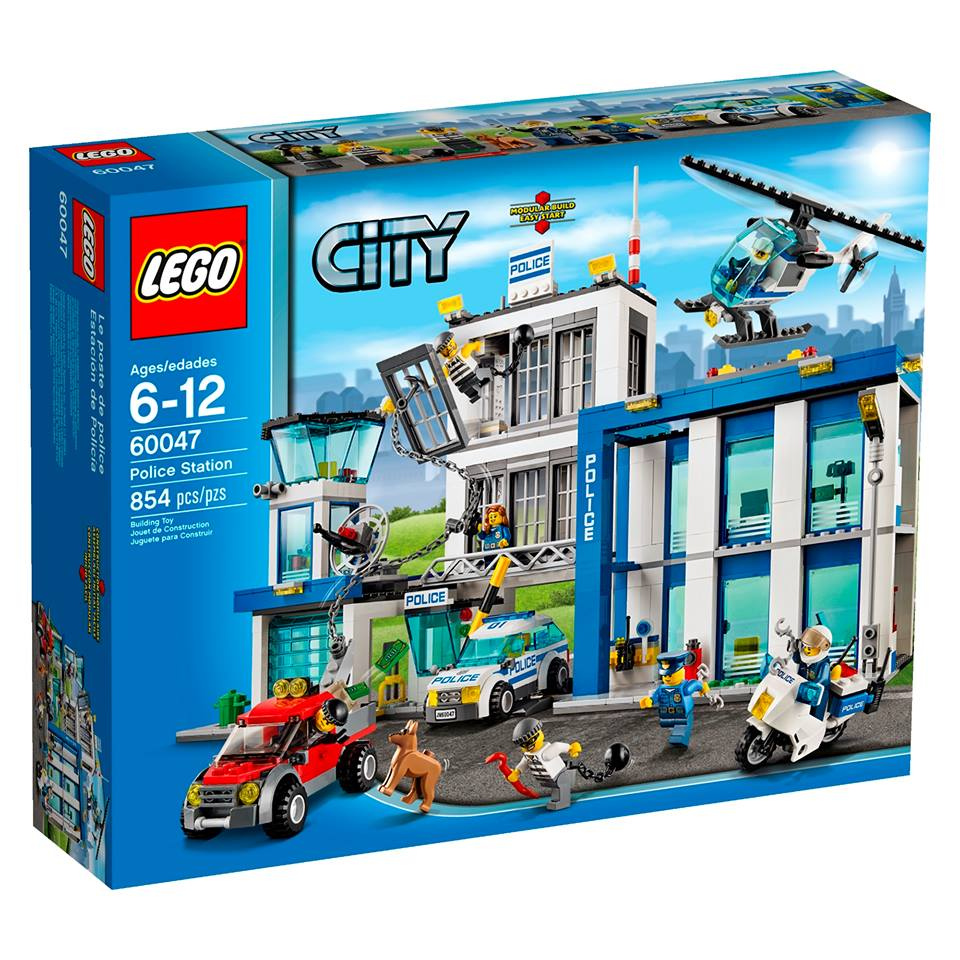 Ending the vehicles’ chapter, the helicopter looks really simple! The landing gear is a unique piece, the cockpit with a single handle has a big windshield that opens widely and just behind it there is space for a small compartment to store a few police tools. Above, the engine and the propellers with only two blades give the heli the necessary power for safe flights. 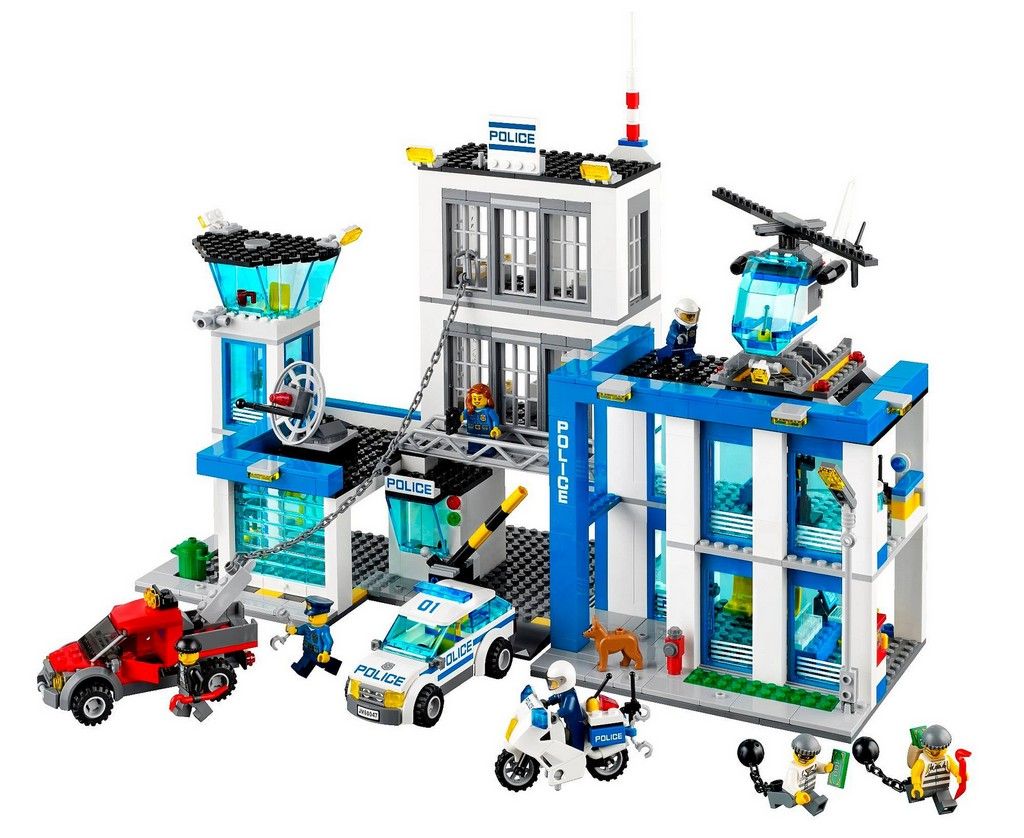 Globally, I would say that compared with the previous model, I prefer this new Police station, but none of them beats my older 7744 – Police headquarters. With many city details all around, such as the multiple street lights, the garbage can and the red water pump, the enormous quantity of glass surface is also a major point that contributes for a great aesthetic. The vehicles aren’t the best but definitely there is space to add some more. In terms of price, for now, don’t expect anything less than hundred dollars which is fair according that we are talking of a new release, it is one of the most famous police sets, and it brings almost nine hundred pieces. Enjoy the great details!