Definitely, the cops were quite well reinforced this year. The Helicopter Surveillance is a new Police set that has just recently arrived to retail. With more than five hundred pieces, it brings a big fat helicopter, a robbers’ hideout (one more…) a small van, a few useful accessories (including a useful wheelbarrow and a brown barrel) and five mini-figures (the traditional thieves and three officers, including the pilot).

Helicopters aren’t my favorite type of vehicle, and having one as the all the center of attention, I will certainly pass this set when I see it on stores, despite the all the heli’s features which look rather cool, and most of all, the nice Robber’s hideout which is nothing more than a small building, hard to find similar sometimes, but with some really nice details.

The Helicopter, ignoring the enormous wingspan of its paddles, is still pretty large, being around twelve dots wide. The cockpit brings a big windshield with glass all around and inside seems quite big with space for the pilot, and for the most probable control panels and handlers. Unfortunately and looking at the pictures, at the first glance, I see no way of reaching it without dismantling the roof and all that structure that is built above.

Just Behind it, there is a big compartment with lots of space for the officers and of course the arrested thieves and I wonder if there is a small cell inside. At the back we can see a nice lifting door that allows a good access through the back of the aircraft and in the middle, just below the propeller, there is a big entrance with a yellow safety bar, perfect for the cops to have a better view of the hideout. 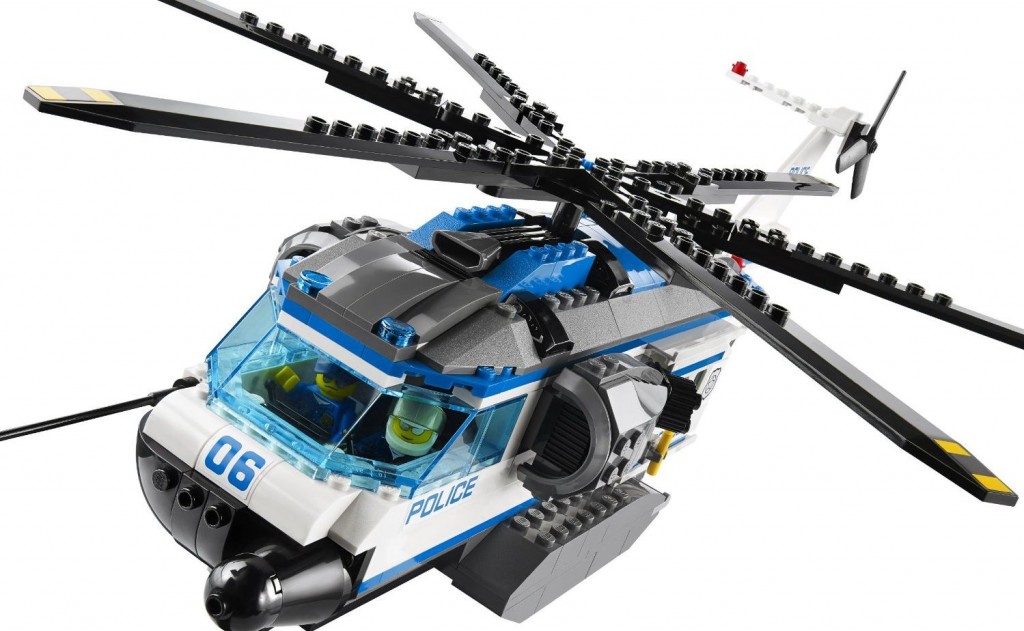 On top, the propellers are, with no kind of doubt, bigger than the usual, having six big blades on top and two powerful engines one on each side, just next to the cabin. Finally and with so much space inside, it was good that the roof could be opened as a whole, increasing the access to the all interior and by consequence the enormous playability that this set seems to have.

Having a look at the thieves’ properties, I really love that sliding door in the Hideout. The small building as you can see is quite simple, it has a mix of cement and brick which looks absolutely nice in terms of color scheme, however my only appointment goes to the green door which could have a prettier color (the green doesn’t fit there for sure!) The small garage is definitely the highest point, having the sufficient space (perhaps not if we consider the lenght…) for the robbers’ car, the green van. 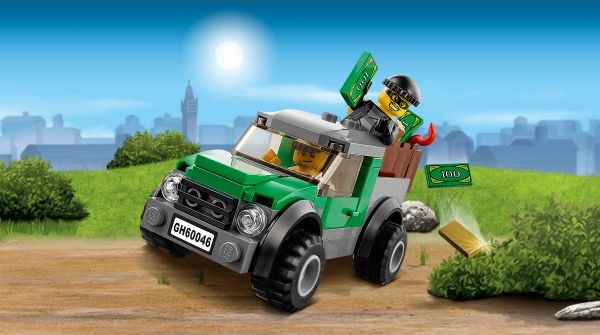 The small van couldn’t be more efficient in terms of space, because with such a short size, it has everything just like its bigger brothers. The wheels are the same, the cab has space for the driver, the hood is small but looks pretty nice and at the back the trunk has the right space to carry a small box with all the stolen money and jewels.

Overall, I think that this set might cause opposite feelings, depending how big your police collection is. On one hand for those who don’t have many police vehicles, this is definitely a nice addition with plenty of stuff to play with. But for the others, myself included, that already have a safe town, I think that this is just an interesting upgrade of older sets. Enjoy the pictures!