The Police Patrol is definitely one of the most pleasant sets of this new police wave. It presents a big police van with a long trailer, two inflatable boats, a smaller for the robber and a bigger one for the police and three mini-figures, a robber with a different suit (finally) and two police officers with some really nice blue uniforms among a total of four hundred and eight pieces.

Having a look at the car, I must say once again that it looks absolutely great and the first thing that caught my attention was, curiously, the enormous distance between the two wheel axes, the back axle is clearly backward than usual which is useful when it’s time to surpass obstacles or small hills.

The front, just all the entire suspension, is slightly raised and doesn’t change much from the usual in this type of police cars. However, the tow bar with the new grid, just above it, and the new front light combination look really very nice. The cab also features the usual but unluckily this time doesn’t bring any side doors.

Just behind it, the trunk looks big and has the appropriate space to carry an interesting mobile operation center that include a small control panel (I think that this time it is a printed brick), a portable communication satellite, and a small compartment to store some additional tools or police accessories. 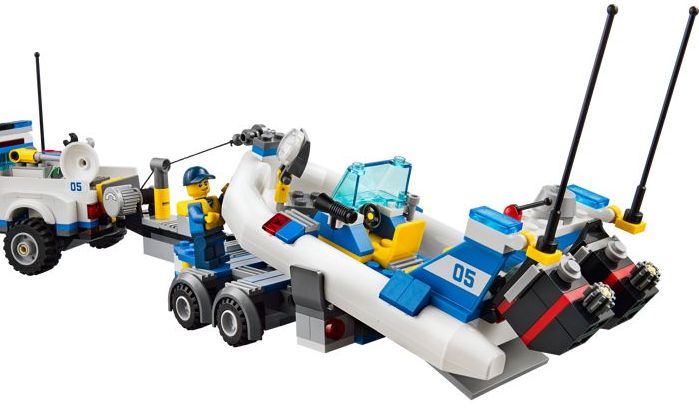 Continuing with the trailer, it looks a bit wider than the truck so you have to be careful when circulating in the city road plates. The structure is built up on some long technic that support a base plane that is necessary for the correct stability when it’s time to travel. At the front, the winch, which has an interesting additional bar, is capable to pull competently the boat up the trailer just by attaching a single stud piece to the boat’s bow. Finally at the back a small ramp ensures that the boat goes in or gets out of the water.

The police inflatable is not much different from other similar boats, however it features this time some really nice details. With two seats for the cops, it has besides the handlers a small windshield for the pilot, a couple of clips, next to it, to store the binoculars and the mega-phone and, in the bow, we can also see a rotatable spot light to chase the robber. With emergency lights everywhere, it also features at the stern, a powerful black engine and a aerodynamic aileron capable of sustain all the communication antennas. 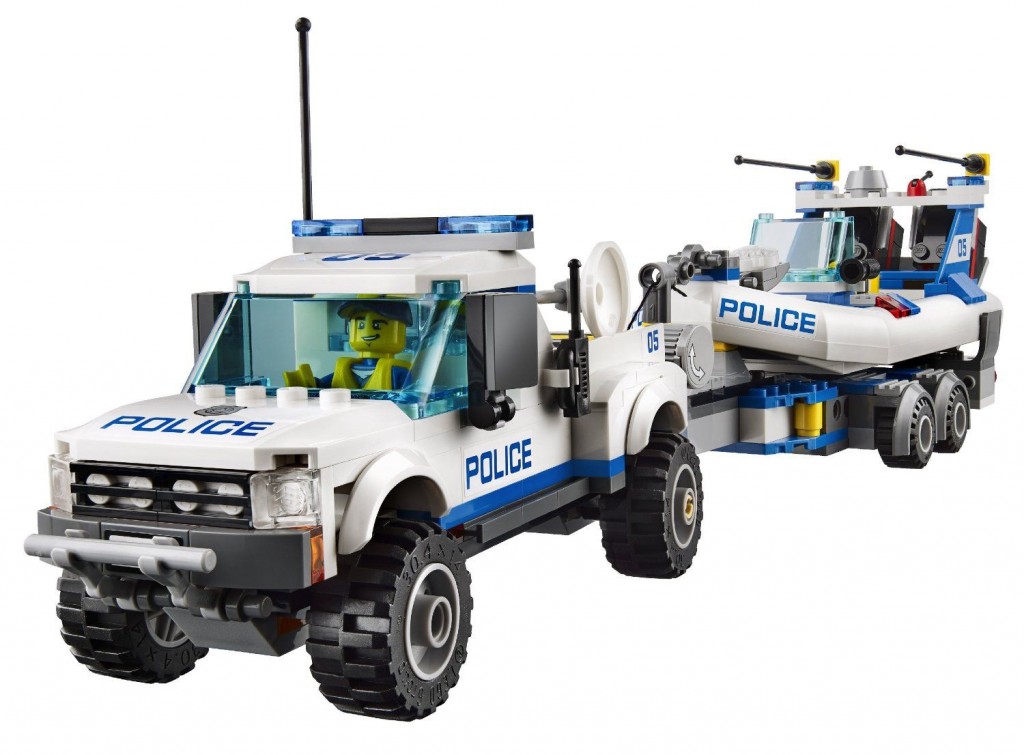 The robber, on the other hand, is also very lucky because its brown boat looks also pretty nice! With a standing piloting position and some nice handlers, it also features some clips for the crowbar and a lantern, and in the stern, the small engine ensures the appropriate power to the lightweight boat in order to escape to the cops. Finally what it seems to be a small island with a lighthouse is more than that: it has among the small rocks, a nice hideout for the thief’s stolen stuff. All that he has to do is cover them with a couple of boars and the officers will never discover them there!

Overall, it looks absolutely one of the finest sets in this Police wave. With four different elements it is surely a high set in terms of playability. Forty five dollars it will be the most probable price when it hits stores next June. Until then enjoy the gallery!