Some new City releases are just upgrades of existing vehicles and the new Mobile Police Unit is one of them. With three hundred and seventy five pieces (around thirty less than the previous model) it features the mobile vehicle, three mini-figures (two officers and a robber) and a couple of small white barriers. This time, there is no additional vehicle, nor for the thieves or the Police.

Globally the vehicle’s concept is the same of the others but there are some new details that look absolutely great. Staring by the cab, it has a new grid with incorporated lights, and above the usual windshield there are four yellow spot lights. Inside the cab there is space for two figures (making some gym with their arms…), for the coffee cup and the steering wheel.

The roof seems to detach easily for a better access to the interior and is filled with plenty of blue lights which is normal in this type of vehicles. Once again I have my doubts about the strength of the white bricks near the wheels that in some older models were constantly falling which was a bit boring.

The trailer or if you prefer the mobile station has all the expected sections but with a few differences. At the front, there is a small compartment that is excellent to store the white barriers or the police accessories like the handcuffs or the walkie-talkie and also the robber’s tools like the craw bar or the stolen money. 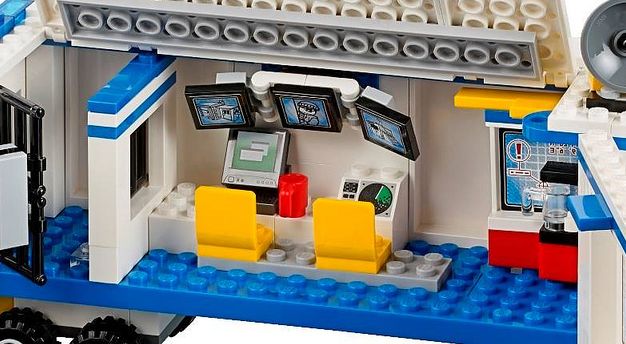 The mobile station itself has suffered a few improvements because this time the cops have at their disposal a couple of control panels, two seats, three(!!) flat monitors (probably they are stickers…) to monitor some surveillance cameras, a city map and next to it an usual coffee machine.

The prisoner cell is placed at the back and has a double security because it has not only the usual black door with some grids but also it can be locked by one of the two big doors of the trailer. These two as usual open widely in order to give the better access to the entire interior and provide the best playability.

In the roof, that gladly this time locks and unlocks the big doors which is excellent when the vehicle is in movement, we can see not only the traditional radio antenna but also a nice satellite dish that “explains” the existence of the three monitors. Lust like the cab there are blue emergency lights everywhere! 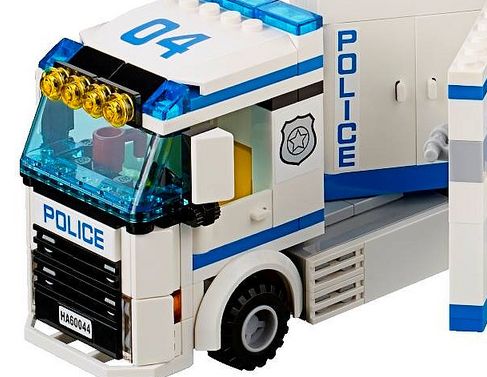 The vehicle itself looks pretty nice but for those who remember the previous versions, there is the feeling that the Mobile units has been gradually reduced in terms of additional vehicles or features. I remember for instance the 2008 model (7743) that included an ATV and a small building or even the 2011 set (7288) that presented a small red car for the thieves.

The mini-figures aren’t properly new, I guess that the robber is the same of many others, but the officers have some nice blue suits that contrast with the more usual black uniforms present on “thousands” of older sets.

Overall, for the predictable forty dollars, this mobile police unit looks a fair deal. The truck itself looks really nice, with a bunch of stuff to play with and the only issue that I point is the fact of not having any additional feature or vehicle just like the previous versions did. Enjoy the pictures!