This is the first of several posts about the new wave of city sets that will hit the stores in the beginning of the year. A few days ago I spoke about the new Auto Transporter (60060) which I’ll buy as soon as it’s available, today it’s time for the new High speed Police Chase that is basically a remake of the 2011 model, Police Chase (3648).

The set brings exactly hundred and ten pieces and features a police vehicle, two motorcycles, three mini-figures (two robbers – male and female – and a police officer), a nice wall with a small ramp and a couple of city accessories such as the garbage can (with no cover) and the traditional water pump.

Personally, it is a bit unlikely that I‘ll ever buy this set most of all because it’s more of the same in terms of bikes and police vehicles, but I must agree that both vehicles bring some new interesting details, namely the car’s front that is absolutely aggressive in terms of look (I especially enjoy it!) and the bike’s golden wheels that are simply great! 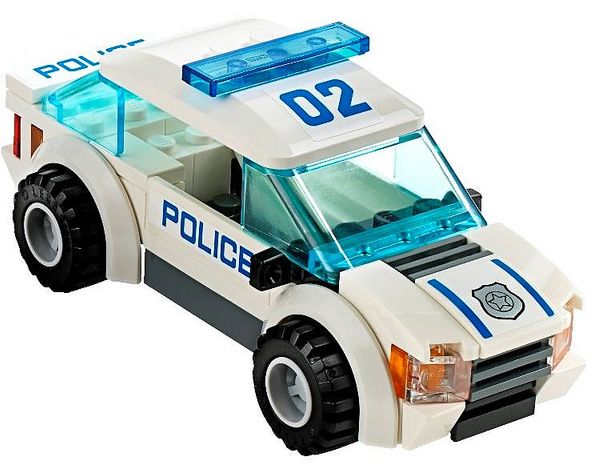 Having a look at the car, it brings a new type of hood in this vehicles’ size, that has been recently used in this year city vehicles (for instance in the 2013 tow truck) and a new lights’ design but globally it has the same structure of some many others from the railway station’s taxi to caravan’s car. It brings no side doors and inside it has space only for the driver that is protected by two windshields.

The bikes are also known motor-cross models, with well chosen colors, black and dark red and the mentioned golden wheels and the small wall made with different colors is excellent to put in a city corner. Finally the three mini-figures are also known characters, despite of being the first time that I see a city female robber. 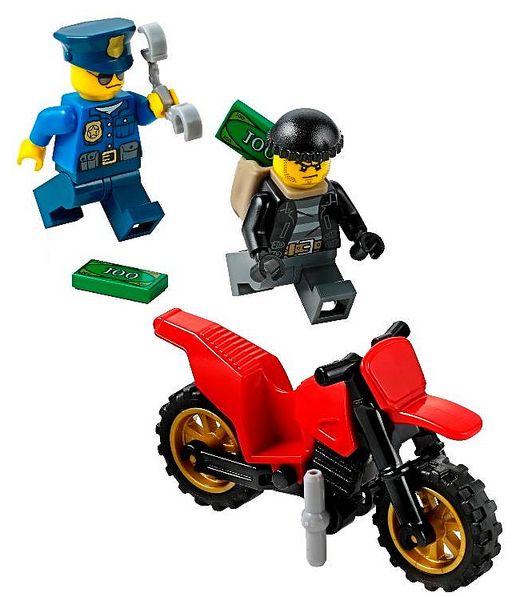 Overall, it seems a nice set for those who want to get into the police theme or even for those who want to add a couple of extra bikes to the town. The car has a new front which is my opinion is rather interesting, the three mini-figures are always an added value especially in such a small set and the two bikes present as I said before some new golden wheels. For twelve dollars it definitely is a nice deal. Enjoy the pictures: