The Monster Truck Transporter is a new city set that will be available next summer. And I’m must say that according to the first pictures it looks very nice. The truck although remembering the toysrus truck or the yellow city truck (3221), has a new design namely the entire engine hood pieces.

Besides the truck and its long trailer, the set has also the great monster truck (welcome back!!), three mini-figures (despite they have similar uniforms we can easily see that there is a pilot, a truck’s driver and a mechanic), a big airborne ramp and a bunch of black tools for the mechanics. 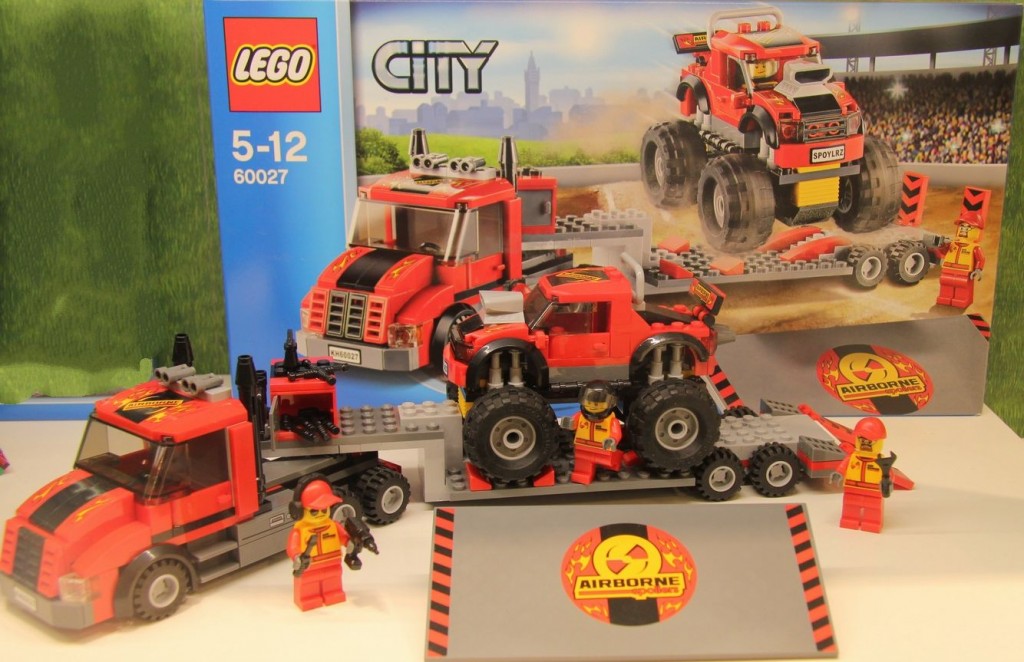 The monster truck is definitely the company’s star and it is pretty well accurate. Basically it is an average city vehicle completely transformed, the only thing that might be similar is the cab. At the front, the engine has a big air entrance and the wheel arches as well as the lights are also reinforced. The suspensions as you can imagine are much raised in order to mount those big tires. I’m pretty curious if that yellow piece, near the suspension, makes any kind of movement…

At the back, there is also a protection bar and a reinforced structure to protect the cab, in case of accident, and a small aileron gives the monster truck the final touch not only in terms of design but also in terms of stability (does this guy really needs this ? It will simply smash everything than appears in its front….). 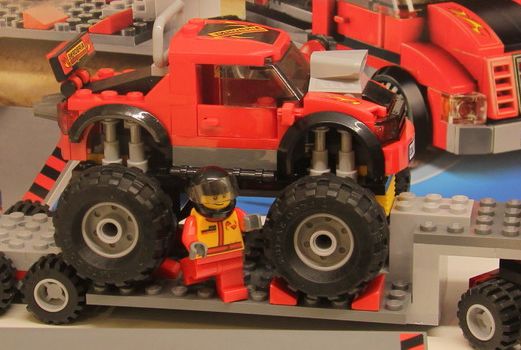 Talking about the transporter, it is very long, especially if we look at the trailer, and globally the structure, despite all the differences, makes me remind the Power boat transporter .At the front, the truck has a new design where the curved hood and the big engine grill assume an important role.

The cab doesn’t have anything particularly new, it is quite wide and has room for a couple of mini-figures. The airborne stickers are also an excellent complement to the set’s beauty, this time, I must say that I enjoyed it. At the back there is space to receive the articulated mechanism, where the big trailer will attach. 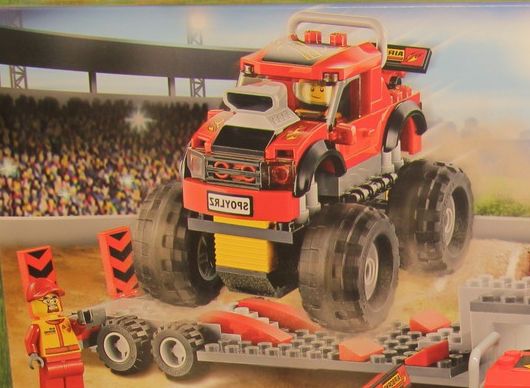 The big trailer has space, at the front, for a couple of cases, where the mechanics will storage all its tools (I’m afraid that there won’t be enough space) and gradually its chassis will be lowered in order to receive the big monster. This detail not only allows the monster truck to easily go up and down from the trailer (it has a nice ramp at the back) but also will give a better stability when the entire vehicles is moving.

This looks definitely a set to achieve next summer. Looking at it, I would say that it will have a retail price around the thirty five dollars and a number of bricks around the three hundred (maybe a bit less). The monster truck is not very big but is considerably tall and the entire truck interacts pretty well with other city sets, being capable of transporting another type of vehicles. Finally the three mini-figures are new and seem to be a great addition to the collection.