Isn’t this a huge surprise!! So much playability, so much details, a bunch of great features all in one set! Prepare your wallet because this set will have two buildings, a bike shop with two floors (!!), a pizza restaurant, a big red city bus, a little street sweeper, a yellow crane (it seems weird this type of vehicle in the middle of the rest…) and a town square that includes a bunch of features such as a statue and a couple of benches among others.

The bike shop, looking at the pictures, is a very large building with two floors totally filled with glass windows, remaining the doubt if the back is opened, which would be nice to increase the access to the interior.The ground floor isn’t very clear yet in terms of features,however it’s not easy to imagine a reception with a cash register, perhaps a small workshop and a couple of bicycles inside. 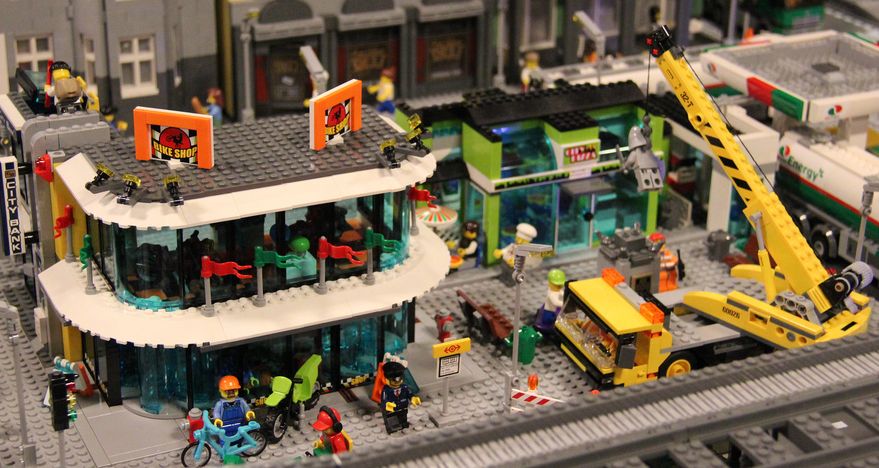 The first floor is basically a showroom with some bikes of different colors and also a few helmets. Just as the ground floor, its details are still hard to identify, however we can see that the floor is quite detailed and filled with 2×2 pieces of two different colors. At the top, the roof has a couple of orange outdoors, each one three little spot lights. 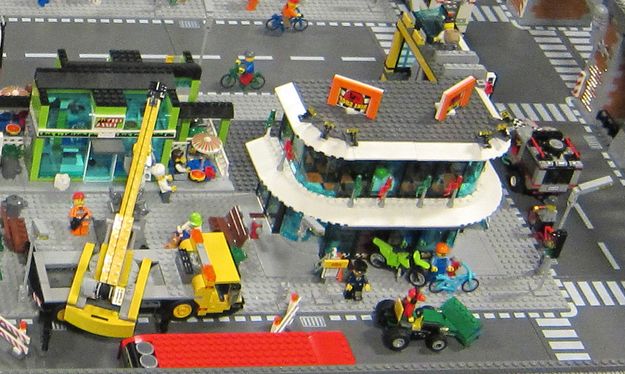 The Pizza Restaurant or shop if you prefer is considerably smaller, it is made with green shades, a black roof and a big glass surface and surely has some nice features not only inside but also in the outside. At the left corner we can see a small esplanade and the in opposite side there is a sort of hidden space for a couple of garbage cans. In the inside there is surely room for the ovens, a small reception for the clients and of course some great pizzas ready to be eaten up!

Enough of building, let’s have a look at the vehicles. The yellow crane is quite large, typical of this type of vehicles, it is eight studs wide which brings some limitation when circulating on the city streets , the cab has space for the steering wheel and for at least a couple of mini-figures and at the back the flat structure is long enough to receive the big crane.

Attached and built mostly with technic pieces it easily turns over the 360 degrees with the role in the set, of putting a statue of a great warrior or soldier on a pedestal in the middle of the town square. Its winch is easily controlled thanks to a side handle that snap or relieves the black rope.

The green street sweeper is the smallest vehicles of this set, but looks really nice. It seems a sort of small tractor, with the back wheels considerably bigger than the front, and attached at the front, the blue sweeper is ready to clean up some mess.Its driver uses a new feature, or at least mostly seen in many city sets this year, which are the always necessary ears’ protections. 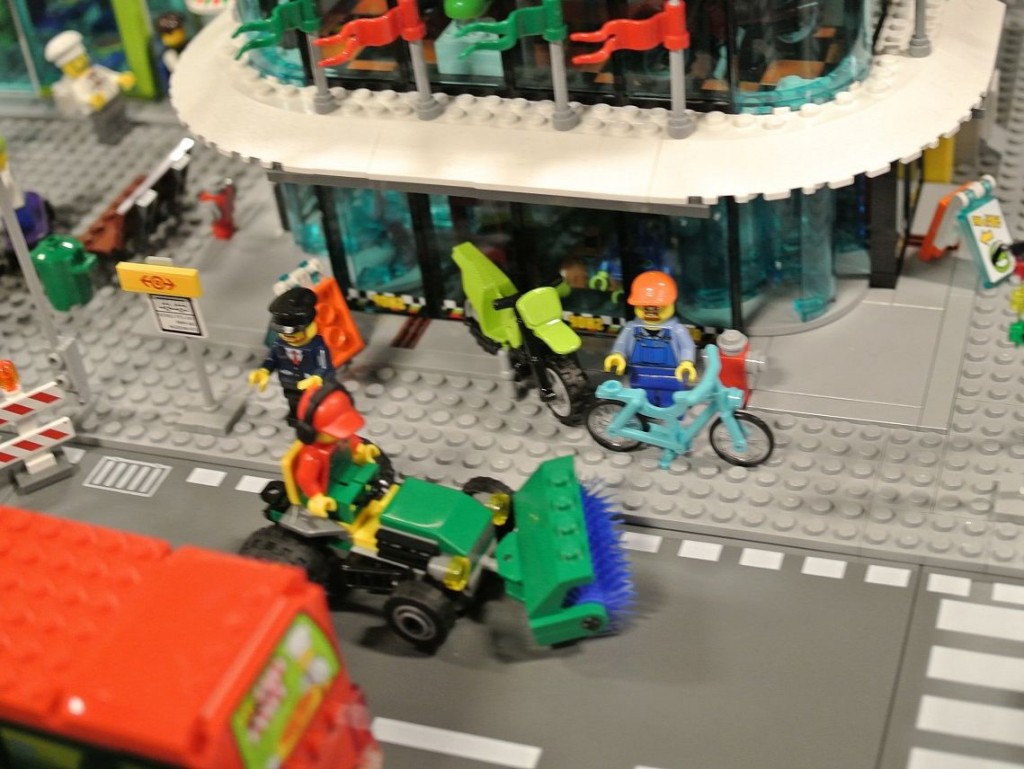 Finally we have the big red bus. It is made with red and black pieces and a huge glass surface which is definitely a beautiful combination. Starting by the chassis we can see that the wheel axes are not symmetric in terms of position, the front one is rather retreated which definitely looks a bit more real.

It has two doors, which I guess is completely new (for instance the 7641 or even the 8404 had only one) and inside there is space for six seats for passengers and of course for the driver at the front. In terms of esthetic it is completely made with strength lines and as expected there are a bunch of stickers almost everywhere. Overall, this is a great vehicle to add to the city collection (the buses are never enough…). 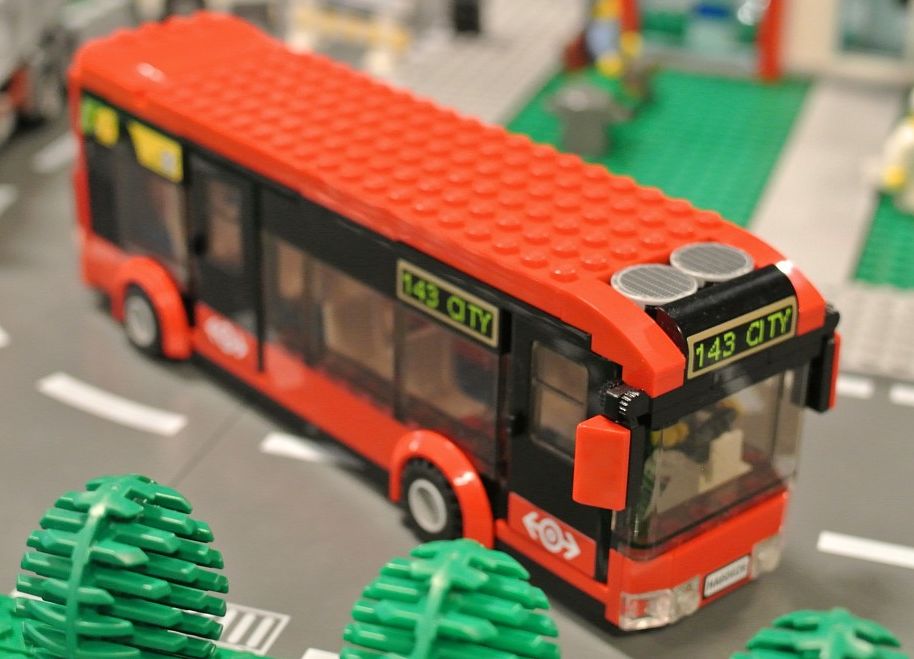 Besides all the vehicles and buildings, there are also some nice and simply features in the outside. We can see some benches, a bus stop, a couple of street lights, a few garbage cans, a couple of protection barriers for the crane’s works and even a couple of red emergency fire hydrants. And finally, of course, the big grey statue!

Globally, this is definitely a great city set and probably one of the biggest of every time. I’m particularly excited with it because I missed the older 7641 and on the other hand I don’t have any similar building or vehicles that are in this town square! The biggest problem will surely be the price, because it will have for sure more than a thousand pieces and the price will be considerably be higher than the hundred and twenty dollars. The release date is planned for the end of this summer or even in October. Please have a look at some additional pictures: