The Fire Boat is a new fire set that will be released in the beginning of 2013. Actually, this set doesn’t have only the big red firemen boat but also an inflatable and powerful race boat. The idea is to create a scene where a serious malfunction on the blue race boat’s engine sets of an emergency.

If we have a clear look at both, easily we will identify them with some previous models. The red boat has the same for instance of two recent models such as the 4643 power boat or even the 4642 fishing boat. On the other hand the inflatable boat has is exactly the same model that is present in theMarina’s set. This is only, however an observation because the final result is pretty good on both cases.

The speed fire boat has a generous cockpit with plenty of space not only for the two firemen but also to their tools such as the extinguishers, walkie-talkies, binoculars and much more. Just like in the previous 4643, the pilot has a steering wheel has a big control panel (four dots wide!!) in order to provide a good piloting as well as a short and aerodynamic windshield that protects him from the water and massive air movement. 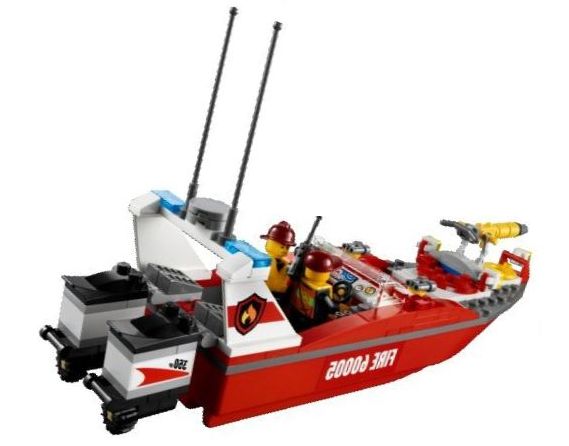 Behind the open cabin there are a tall aileron with two communication antennas, the same that are used in many city sets, and two big (two bricks with 2*4) and powerful engines with three hundred and fifty horse power each that give the boat the most impressive look that it possibly could have. Finally at the front, the big water cannon, attached to a 360º turn over base will surely extinguish the fire in less than a minute.

The blue inflatable is by its look a race boat with a V6 engine with serious problems. The big flames that come from the inside don’t presage a good finishing place in the race. The engine is obviously the best part of this smaller boat, despite its flames. The six big cylinders and a big air entrance give definitely an impressive look to the boat. 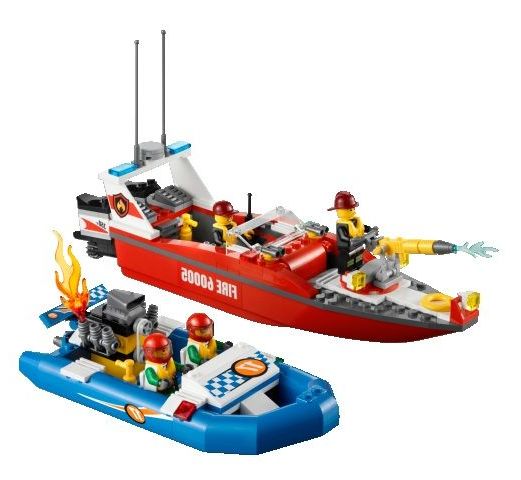 At its front, the two pilots have enough space not only to seat comfortably but also for their handlers. Globally this twenty dollar set is a very nice set, especially if you pretend to add a few boats to the town, but a bit repetitive if you already have the Marina or the two other models mentioned above.