This is probably one of the most enthusiastic Friends set with a lot of stuff to enjoy and play with. The new Heartlake Hospital was release in the beginning of June with the rest of the first wave of sets, but there’s always something new, every time I look at these picks.

This Friends set has exactly eight hundred and seventy one pieces and features a three floor hospital with an heliport on top, a pretty but small helicopter with a rescue stretcher, an ambulance, lots of additional accessories including a small cart, a wheel chair and a bicycle and four figures: Olivia, Dr. Patel, Henry and Baby Ola.

Looking at the Hospital from the outside, it is absolutely beautiful. With plenty of glass and lots of different colors everywhere, it shows at the front a large entrance with a small ramp for the wheel chairs. On the right, where the ambulances can stop, there also a second door that leads directly to the emergency room.

Inside, there are clearly seven distinct rooms in the building: on the ground floor, we can find the emergency entrance with a red phone, the reception with a desk and a water machine, and on the opposite corner a small waiting room with a coffee machine and a couple of news papers. Pretty nice indeed! 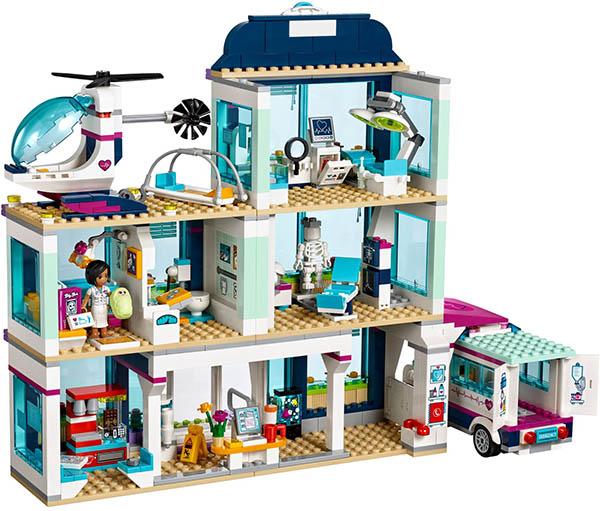 In the first floor there are two distinct areas: the x ray room with a stretcher in the middle and a bunch of accessories and in the opposite corner, the nursery with the bathroom area and the sleeping room where Baby Ola        will certainly receive all the attention from the nurses. Both rooms have also plenty of additional stickers which definitely give the hospital an even more realistic look.

The second and last floor has only one area, the examination room which shows also plenty of elements such as the headlights, the exam table, the heart monitor and a few more. The second half of the floor is filled with the heliport that has the appropriate space not only for the heli but also for some small city helicopters.

Talking about the Heli, it’s not the prettiest but it’s surely a unique model in terms of design. The cockpit has the enough space for the doll that is protected by the single windshield. In the landing gear there’s a sort of winch that allows carrying an emergency stretcher when it’s time to transport urgent patients. 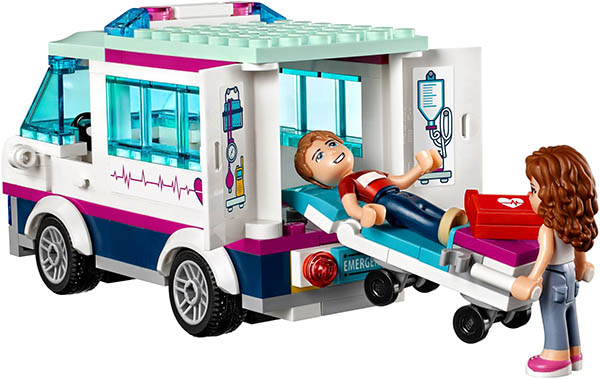 Finally the ambulance! With a traditional design it has a bigger cockpit than its usual that can transport two figures. At the back, there is space for a stretcher with wheels as well as plenty of stickers on every part. The roof detaches easily which is good in terms of access and playability.

Overall, it’s simply a must for the Lego Friends fans. The Hospital is nicely detailed with all the major elements that a place like this should have, the vehicles look pretty nice as well as the mini-dolls that once again are very well dressed. The set is available on retail with a price around the hundred dollars. Enjoy it!