The Amusement Park Arcade is another Friends set that will shortly be available on stores. With hundred and seventy four pieces (the set looks small but if you look closely, it’s built with plenty of small bricks) it is definitely a nice and cheap option with plenty of fun and playability to enjoy.

As you can see in the pictures, the Amusement Park Arcade features three distinct games that include a basketball launcher, a target shooting in the and a frog catcher at the left and a Mini-doll, Mia, with a few additional accessories.

The central stand includes the target shooting and a nice publicity panel on top with plenty of lights. Right in the middle, at the front, a small stud shooter with a box with extra ammunition nearby is the trigger to fire against the three targets. Looking only to the images, I would say that it will be very easy.

As easy as the target shooting is definitely the basket ball launcher! With a big basket stuck into the panel, the launcher uses a small catapult to throw the ball which I think is a unique piece. On the opposite corner is the prettiest game in terms of color but the less interesting in playability. The frog catcher consists only on hit the frog with the hammer but honestly it doesn’t seem particularly exciting. But the idea is good and the machine is nicely idealized with the level panel in the front and the frog right in the middle, appearing and disappearing. 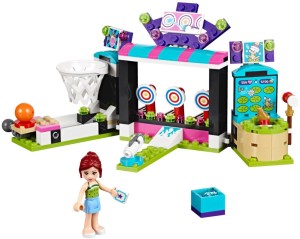 Overall, for around fifteen dollars, it looks absolutely a very appellative deal. It’s cheap and shows plenty of different elements to play with. Mia as usual is nicely dressed with some summer clothes. The set should hit stores next month with a retail price around the fifteen dollars. Enjoy it!