Emma’s House is a 2015 friends set that has recently hit stores. With exactly seven hundred and six pieces, it is the head set of this wave and features a big purple building field with really nice details, three figures (Emma, Charlotte and Luis) and a few accessories such as a blue bicycle, a second garden and a small bird with its house.

Let’s have a look at the outside! With lots of flowers everywhere, the entrance looks fabulous with a white fence that includes a mailbox, a plant with an arch’s shape and a nice little path made with plenty of small stones. Once at the door, there also a lamp at a corner and a printed piece with what it seems an intercom.

Inside, the guys get in directly to the living room. The images aren’t very clear for now about that but as far as it’s possible to see, there a big flat screen in the wall, a table in the center and a sofa on the edge. Next to it, on the ground floor, a big kitchen seems to bring all the necessary elements for a good meal which includes a dishwasher, a fridge and a table with three seats.

Up to the first floor, it’s possible to find a bedroom with all the usual elements, namely a bed, a vanity table and a sliding balcony. Next to it, there is also a bathroom that includes a shower and a small washbasin. Finally on top the balcony that besides the nice view, features also a nice barbecue that will certainly provide a nice meal. The small roof next to it has also two skylights to provide a better illumination. 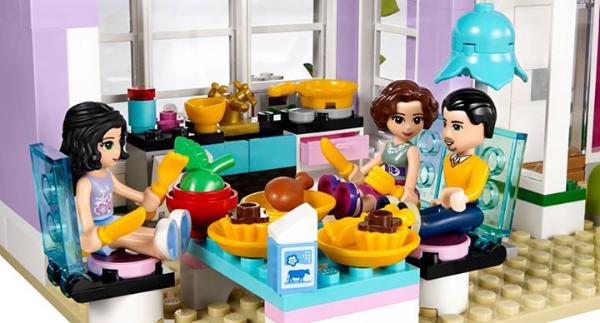 After this small presentation, it comes for me, perhaps, the best feature not only in terms of building but most of all in terms of playability. The four rooms are can be easily detached from each other and disposed in a different order, allowing to present four different buildings, as you can see in the back of the set box.

The mini-figures are as usual pretty nice and this time with a new particularity: they’re a small family with Charlotte and Luis in the role of Emma’s parents which I think that is the first time in many years. Globally, the building looks definitely really nice, with a huge potential of playability and integration with other friends sets. The set isn’t cheap, it should retail around seventy dollars but according to its size it’s once again in line with the rest of the theme. Please have a look at the gallery and enjoy!