The Heartlake Horse Show is a new Friends’ set that has just hit stores. It brings three hundred and fifty five pieces that feature a lot of interesting stuff about horse riding. An interesting point in this set is the fact that it’s constituted by several different elements that can be easily separated and integrated with other friends’ sets.

The horses aren’t anything properly new in these sets, however I guess that it is the first time that we have this type of event with them. And for that the set has some pretty nice stuff: a winners’ podium, a small stable for the horses, a grooming station, two different barriers, a judging table, two mini-figures (Stephanie and Robert), a small red wheelbarrow, a few blue accessories and of course a couple of brown horses.

Built over a green plate, simulating the grass, the podium mixes many different colors being the purple and the light brown the two most expressive. The big arch at the back brings a couple of nice flags and medals and just below it, a small podium and an always pleasant trophy.

The two horse booths are symmetric and completely closed in all sides. With a brown floor and some lights purple barriers that divide the two areas, it has, at the front, two small pink doors. A small clip on the edge allows holding a small shovel to help Stephanie or Roberto cleaning the stables. 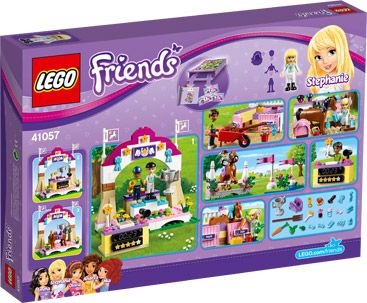 Before competing it’s necessary to prepare the horses. And for that the girls have at their disposal a nice grooming station with some nice features and accessories. In the small wall we can see some helmets, a couple of drawers, two perfume bottles, a golden tap and even two black ropes. And if that is not enough, at the front there are also two pink cells one for each horse.

The barriers are completely different from each other and look also pretty nice and will definitely make life hard to the horses. One of them has water in the floor and a small bush as an obstacle. The other one is more conventional being the one that is more similar with reality. Finally the last element is the judging table. It is the smallest part of the set but it has a couple of interesting details such as scoreboard at the front which seems unfortunately a sticker or for instance the black megaphone to announce the horses. 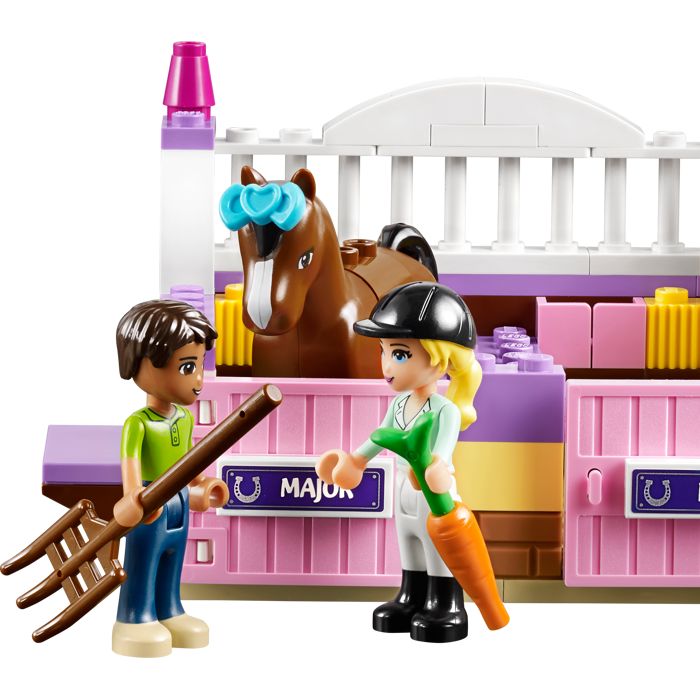 Overall, I guess that this isn’t one of the most enthusiastic friends’ set however it has several different elements that not only provide many hours of funs as well as can they can be easily integrated with other, especially those that are inspired in the countryside. Enjoy the pictures!