The second exclusive Creator Holiday set has finally been unveiled. The new Ice Skating brings hundred and twenty nine pieces and features two mini-figures (a couple of kids), a small ice island a with a slide and a rink with a hockey goal and some additional elements such as a couple of sticks, a slider and a street lamp .

The slide looks really cool with a sloping angle and plenty of ice elements and the little red kart which is quite simple to build, seems to slide on perfection all the way down. Next to it we can find a reasonable ice puddle with a goal on the edge that looks quite interesting not only in terms of beauty but also in terms of building. 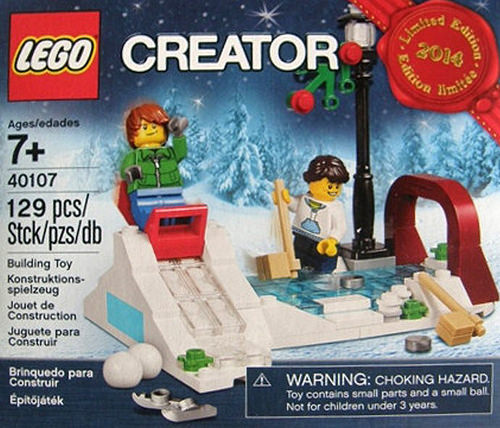 Next to the hockey goal there is also a black street lamp with a branch and two red balls, introducing the first Christmas signs. Unfortunately this set is a limited edition and will only be available during next brick Friday between 28th November and December first for purchases of 99 dollars or more. Hope that you’ll be lucky one!