Now that a new wave of trains is about to hit stores, let’s have a look at this 2011 model:Looks like that the “brother” of the Cargo Train 7939 maintains all the nice features: speed, the number of mini-figures and pieces (this one has exactly less eight than the other) as well as the controls.

This great set has a red locomotive (I had the same impression that in the other- it is bigger and heavier than I thought), a brown wagon typically used for transporting iron or cereals, another one, white and green with big side doors, to fill in with boxes or pallets (it is rather alike some city cargo trucks), and finally a third one which is my favorite, a maintenance carriage. 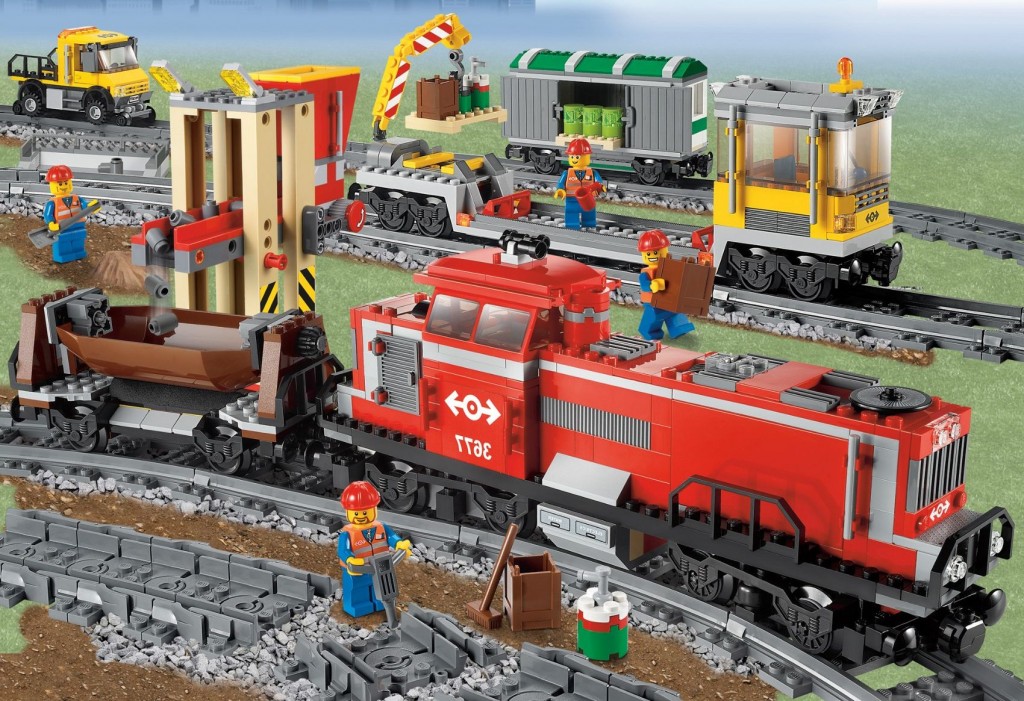 Starting by the good looking locomotive, in terms of building the similarities with the yellow cousin are huge. The chassis is the same as well as the space for all the electric components, including the batteries, and the engine is enormous and even the little switch uses the same bricks. Simple but efficient, I would say.

The locomotive model is, of course, pretty different, this looks like a diesel train and the previous an electric one. So, and keeping the aesthetic, this one has just a single cabin, at the back, with the same control panel than the 7939. So, this way, I point the same question to both, a couple of extra handlers for the driver would make a better effect, or am I wrong? 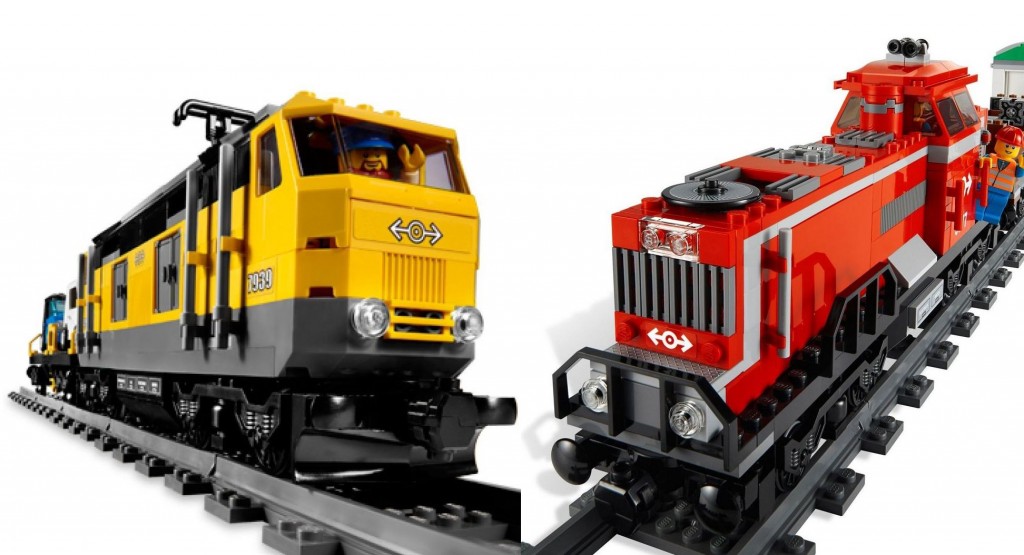 The double roof opens easily in order to give a better access to the cabin and finally I would like to remember an excellent but extra feature. The train – engine and construction -is prepared to receive a couple of lights at the front. All you need is some extra ten dollars and buy the 8870 power functions set. 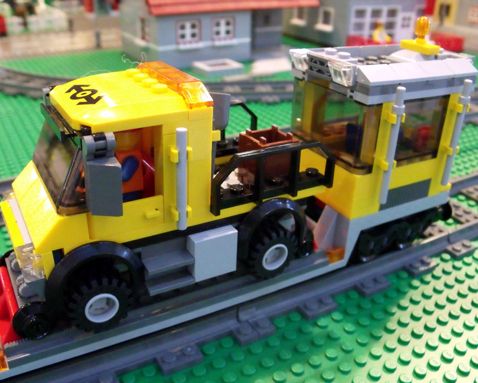 The maintenance carriage is the longest and the better in terms of playability not only because of its features but also because it has a small truck with double axes (road and railway wheels).The big platform gives not only a considerable balance to the truck when the train is in movement but also allows the transportation of other vehicles which increases greatly the set’s playability. And of course we must not forget the crane at the back which easily lifts the rails and a bunch of goods’ pallets. 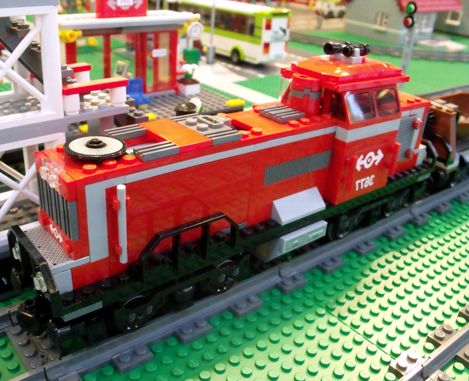 The small truck besides the spoken wheels has also, at the back, a nice trunk with plenty of space to transport tools and accessories as well as a garbage can. I must say it again, the couple of extra rail wheels are definitely very nice. Besides those features, it is an usual city yellow truck with the usual cab.

The other two wagons are easy and fast to build and are not only a good added value to the set but also to the 7939 if you are super enthusiastic to buy both. Of course, the alternative is going to ebay or amazon and buy them separately. Twenty five dollars is all you need for that. 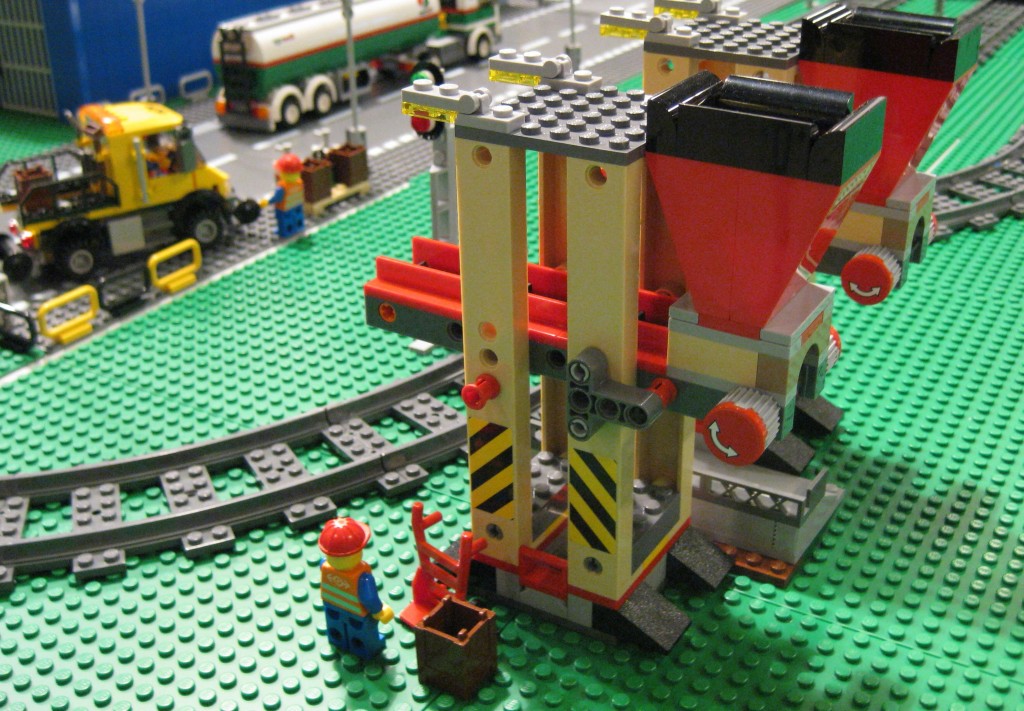 Finally there is a big red load and unloading coal platform, next to the rails. It looks good but not very realistic or even practical. Once the coal is in the wagon it’s not easy to unload it. Honestly I prefer the big green sliding crane of the previous model. It interacts with other vehicles, namely the trucks, as well as with the train’s carriage.

Globally it is an excellent set. The few minor points don’t outshine the excellent set features. However the 7939 in terms of value for money is unbeatable. For extra twenty dollars you get an articulated truck, two smarts and the big green crane. As far it concerns to this one, be prepared for the price. One hundred and fifty dollars is quite an amount but the train surely worth it. If necessary the instructions are right here: