The Rocket Rally Car is a 3×1 Creator set that has recently hit stores. It contains two hundred and forty one pieces and presents three different building options: the rocket rally car as the main vehicle, an interesting jet truck and a third one, a sturdy ATV.

The Rocket Rally car looks absolutely cool! With a nice color scheme, low profile wheels and lots of nice little details, it show at the front a big engine with an extra air entrance and a big cockpit with two seats which is rare in these small/medium size cars .

On top, the big roof seems detachable and shows some interesting details from which I would choose the big rocket engine and the blue spoiler in the back. Through the set box picture it is also possible to see some nice extra features such as the removable hood in the front, or the possibility of moving the rocket, at the back, whenever it’s necessary. 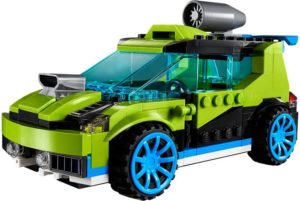 The other two vehicles look also pretty nice. The truck looks sturdy and shows different tires from the rocket car. The cab looks large and the spoilers were also maintained in this model. The Quad vehicle follows the trend and seems built at the first glance only with small pieces. The rocket engine is also present and it’s placed behind the seat. 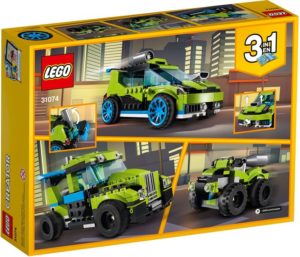 Globally, for around twenty dollars, it’s definitely an interesting 3×1 creator set. The three models look cool, and the only missing detail, a mini-figure, won’t be hard to replace. Have a look at the pictures and enjoy it!