The Lighthouse Point is another 3 x1 creator set that will shortly arrive to stores. It has a considerable size, with more than five hundred pieces, which are enough to build an original model with a lighthouse tower with a light brick and a small house nearby, a couple of mini-figures with some accessories and a  pretty brick built whale.

Despite not being the best in terms of playability, I must say that I like this Creator set. It’s pretty, it shows lots of color and somehow they’re a good complement for many City sets, especially in this case for those who are close to the shore.

The lighthouse shows four different levels until reaching the top, mixing the traditional white with red and a couple of small details such as the small windows and a few brown brick pieces. Unfortunately there isn’t for any available picture from the back in order to see its interior but according to the lack of space I think that there’ won’t be much to show. On the top, the lighthouse features a nice tower with a brick light and a small structure with glass and a round barrier for protection. 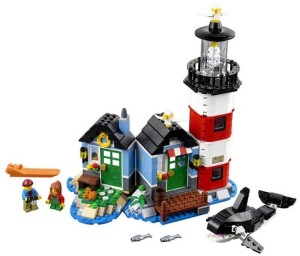 The two houses are very simple and probably just like the lighthouse, their interiors will be naked, but in the front, especially in the outside they’re surely pretty. One of them has a small harbor with a barrel and the other a garden with a small path and a bench. Both walls look similar featuring a green door, a small window and a lamp.

The brick built whale looks happy and it’s made with plenty of small pieces and I think that it’s nicely conceived, being easy to identify all the major parts of the animal. The mini-figures, just like the set, have colored suits and according to the pictures seem the lighthouse man with his daughter. 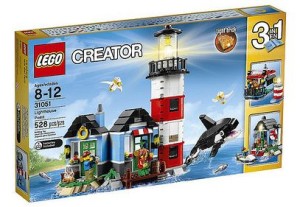 Being a 3×1 set, the other building options according to the set box are a large boat and a complete house with a motor bike which seems definitely pleasant alternatives. Overall for around forty dollars it’s absolutely an interesting deal with plenty of color and beauty. The set should be available next June, just like the rest of the Creator wave.