Sometimes, unfairly, I tend to put these smaller creator sets into a second plan. And honestly I don’t know the exact reason but the fact is that most of them gather big part of the characteristics for a nice Lego set: good playability and the essence of Lego, build, dismantle and rebuild again.

This new creator set is a good example: The new Adventure Vehicles, with a bit less than three hundred pieces, shows three different building options: an off-road vehicle, an hovercraft and a small helicopter, everyone of them with a couple of interesting features.

The main building option is the off roader that shows a pretty sturdy look with a nice suspension and big wheels to surpass the obstacles. The winch, at the front, is completely maneuvered through a small technic mechanism placed at the back, and inside the cockpit it is also possible to see a big red seat for two passengers, a steering wheel and a few additional elements such as a fire extinguisher or a tool kit. Having a close look to the pictures, we can see see that the doors can also be easily detached, giving the car a nice cool look.

Having a look to the air, the helicopter seems pretty nice but at the same time a bit simple. The small cockpit and the winch, placed on its left seem the only appellative features. Finally, the third option, the hovercraft, seems quite sturdy, just like the car, and shows all the main elements in terms of design. The cockpit with a powerful spotlight is placed at the front, the propellers at the back, and just on top, a nice rotating radar detects all the nearby objects. 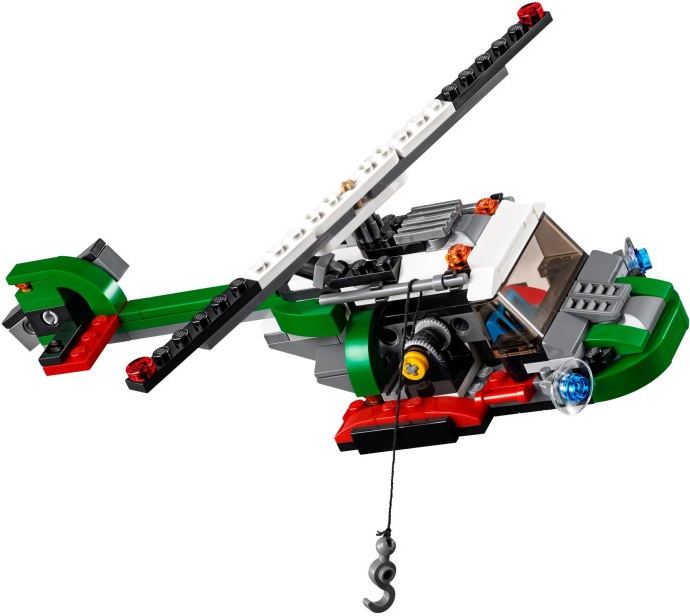 Overall, it seems a pretty honest deal. Three hundred pieces, three different options to build, from land water and sea and an interesting price. The set is already available on stores and should retail around the twenty five dollars.