The Mountain Hut, as well as most of the other Creator sets, has been recently unveiled and the first impressions are absolutely very good. This new 3 in 1 creator set brings five hundred and fifty pieces which in enough to build the hut, a nice climbing mountain, a new ATV and one nice mini-figure, a climber.

First of all, a single note for the excellent box image, which integrates perfectly the hut in its environment. This little house in built with wood shades and mixes it with a dark red roof, some light brown beams, a blue door and at a corner there is a nice big green chimney that goes the entire entire hut’s height.

Unfortunately there are no pictures from its interior but looking at its size we can’t expect much more than a small table, a seat and perhaps a small fireplace, attached to the chimney, if we attempt that there is white smoke coming out from the top.

Outside, we can see a small window in the roof which might indicate that there is a small loft in that area that doesn’t have height for many things. Besides it, the hut has also some additional stuff such as the short fence at the front, a small lamp near the door and even a pickaxe attached to the wall. 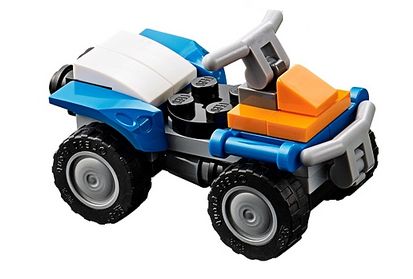 The mountain, just next to it, is definitely very beautiful and features a nice color combination that mixes the blue from the cascade that forms a small lake, the green from the plants and the grey from the mountains rocks. At the bottom, near the cascade, there is also a nice and considerably big cave with an interesting brown bridge and a small fire next to it.

Finally, the small ATV has some new interesting details such as the front bumper that uses the same piece that the handlers, the new tiny wheel axes and at the back it seems to have a small exhaust pipe made with single stud pieces. 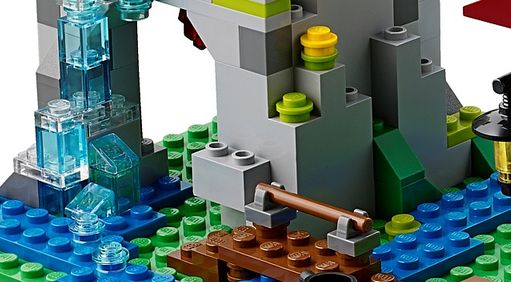 The other two models as you can see through the set box feature a small house built up on the mountain, a tree and a canoe and the third possibility shows a bigger construction using not only the bricks of the original house but also those that were used in the mountain. The ATV is also part of this third option!

Overall this seems a great addition to the Creator’s Houses. Obviously if you have a previous model it’s certainly unlikely that you buy this one, but if you don’t go ahead because in my opinion it looks a nice model with some interesting features and a great ATV. The price according to the number of pieces will be something around the forty five dollars. Have a look at a few additions details: