his is one of the 2015 Polybags that I wouldn’t mind to find on a local retail store, for several reasons. First of all it looks pretty cool, it brings a couple of interesting features and it would certainly be a nice addition to my town.

The new City Demolition Driller features only forty pieces that is more than enough to build this small construction (or in this case demolition…) vehicle and also a mini-figure, a usual worker wearing an orange uniform. 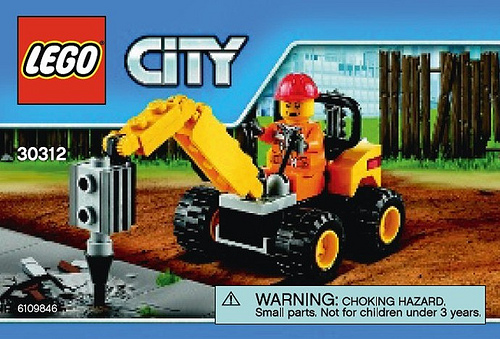 The Driller has at the front a yellow arm with a grey driller on the edge. The arm doesn’t rotate however it can assume several angles which good not only in terms of precision but also when it’s time to put the vehicle on the road and for that, the worker has a nice seat with a couple of handlers. Finally at the back there’s also space for a clip with an electric saw. Overall I’ll certainly achieve this five dollars polybag. The biggest problem will certainly be to find it!