Lego has just officially announced the latest Ideas set, the Beatles Yellow Submarine. With a total of five hundred and fifty pieces the set features besides the sub, five mini-figures (the four Beatles: John Lennon, Paul McCartney, George Harrison, and Ringo Starr, and Jeremy, a curious but funny creature.

The sub has a nice color scheme mixing the yellow with a few orange and red shades and shows some interesting details such as the propellers, the periscopes or even the detachable top that allows access to the interior where can be found some seats for the guys and a few handlers.

If the submarine wasn’t enough, I think that the figures are definitely an additional reason and a unique opportunity for the Beatles fans to have their band as a Lego mini-figure. The set should be available next Month, with a price around the sixty dollars. 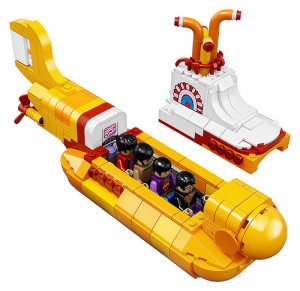 Take a look at the official presentation and video:

Take a surreal trip under the seas in the LEGO® version of the Yellow Submarine from the iconic 1968 animated musical fantasy film inspired by The Beatles. Ideal for display or role-play fun, the Yellow Submarine features loads of cool, authentic details including a cockpit for the included minifigures of John, Paul, George and Ringo.