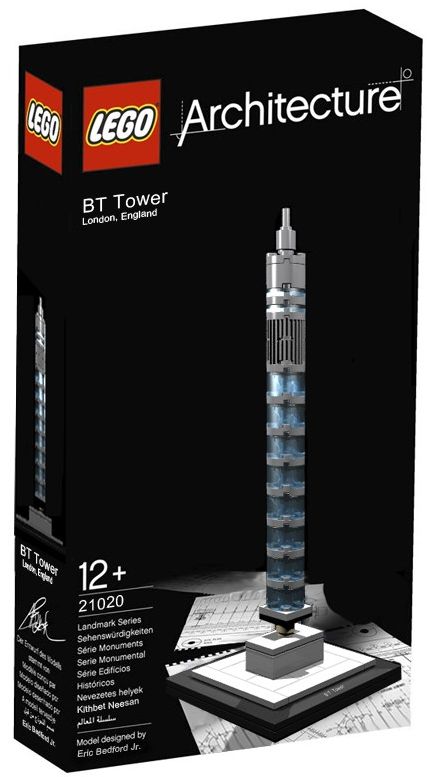 Probably, the problem is mine because I’m not a big fan of these small architecture buildings. Take a look at the complete press release:

BILLUND, Denmark – LEGO® Architecture, which uses the LEGO brick to interpret the designs of iconic architecture around the world, has added another London landmark to the series – the BT Tower.

The BT Tower, formerly known as the Post Office Tower, is one of the most recognisable buildings in London. It was built to support microwave aerials.

“Every time I visit London I see the BT Tower on the horizon, so I wanted to recreate it in LEGO” says the architect and designer Eric Bedford Jr. In capturing the essence of the tower in LEGO bricks, Eric looked at the aesthetics rather than engineering, especially the use of colours, patterns and materials that define the ‘spiritual DNA’ of the building.

Construction of the Post Office Tower started in 1961 and was completed three years later. When built, it was the tallest building in London, at 189m (620ft) high. Today, it’s still a major telecommunications hub, and has a rotating restaurant at the top.

LEGO Architecture products feature well-known buildings, and the work of important architects. Aimed at inspiring future architects, engineers, designers and architecture fans around the world, the range contains a booklet featuring step-by-step building instructions prefaced by history, information and photographs of each iconic building, its design origin, its architect and its architectural features.

The LEGO 21020 BT Tower will be available for purchase from June 1 in LEGO brand retail stores, LEGOLAND Stores and online at http://shop.lego.com. The product is designed for ages 12+ and includes a booklet with facts and history about the tower. Recommended retail price is $34.99 in the US, €34.99 in most European countries, and £29.99 in the UK.