The London Bus, the next Creator Expert set, was officially unveiled by Lego. The set and its rumors were already known for a while, but all the details and features of this huge masterpiece were only revealed now.

The set has exactly one thousand six hundred and eighty six pieces and shows an iconic English red Bus with thirty five centimeters and two floors with the traditional door at the back. The second floor can also be easily detached in order to access the interior and enjoy its magnificent details.

With a retail price around the hundred and forty dollars, the set should be available next August on general retail. Have a look at the pictures, official description and designer video:

Celebrate iconic design with this charming double-decker London Bus, featuring a wealth of authentic details, including a bright-red color scheme, panoramic windshield, specially made standard-tread tires, destination sign, and an open rear boarding deck with a hand pole, ticket bin, fire extinguisher and a half-spiral staircase that leads to the upper sightseeing deck. Functions include an opening hood with engine, detailed driver’s cab with a sliding door, and a removable roof and upper deck for access to the detailed interior with worn look seating and additional authentic details, including a forgotten umbrella, newspaper, empty beverage can and discarded chewing gum. Reversible transit advertising posters are also provided as printed labels with a 1950s or present-day London promotion. This LEGO® Creator Expert model has been designed to provide a challenging and rewarding building experience with a touch of nostalgia and charm. 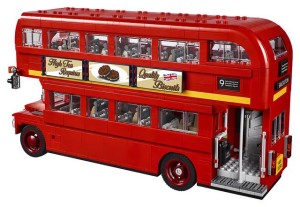 The London Bus comes with an array of brick-built features and details, including large windows, bright red curved bodywork, panoramic windshield, reversible transit advertising posters provided as printed labels, specially made standard-tread tires and a destination sign. It also has an opening hood with engine, detailed driver’s cab with sliding door, and a removable roof and upper deck for access to the detailed interior. 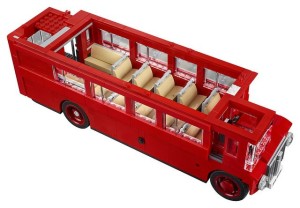 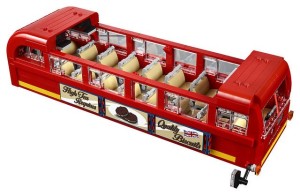 Lift the hood to access the engine.
Special elements include a new-for-August-2017 tire with standard tread, quarter bows and arches in red, and 1x1x1 A2/3 bricks with vertical studs.
This model includes more than 1,680 pieces.
This model is scaled for shelf display alongside other models in the LEGO® Creator Expert vehicle series.
Measures over 7” (18cm) high, 13” (34cm) long and 5” (13cm) wide. 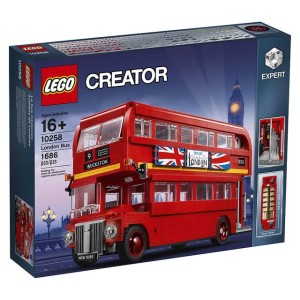