What an awesome surprise! Lego has just unveiled the next Expert Creator set, the new Winter Holiday train, a set with an endless beauty and absolutely an indescribable upgrade of the latest model (10173) which was releases almost nine year ago!

The new Holiday train has seven hundred and twenty four pieces and shows an old style locomotive, a cool wagon which will be responsible to carry the additional power functions, a flat wagon with lots of presents and a Christmas tree and finally, at the back, a small passenger carriage.

Besides this lovely train, the set shows also five mini-figures (a locomotive driver, a ticket collector, a grandmother, a boy and a girl) with assorted toys that include among others a space ship, a train, a fire truck and a Robot, a small station and finally sixteen railway pieces that constitute the traditional round track. 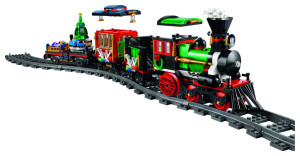 Having a quick look to the train, the locomotive has the traditional color scheme and lots of amazing details, such as the smoke in the chimney, the old style wheels, the golden pieces and inside the cabin, the driver maintains all the necessary controls to maneuvers the big Christmas machine. 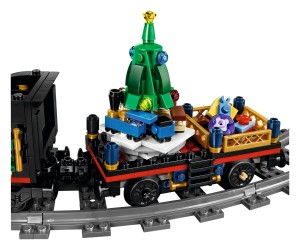 The smallest wagon is perhaps the most important. It carries the coal but in practice it has the appropriate space to receive the additional power functions which aren’t sold with the train. On both sides, it features a couple of beautiful decoration. The flat carriage is perhaps the most colored one. Right at the front a highly detailed Christmas tree is built up on a base that easily rotates whenever the train moves. This should definitely give the train a very cool and unusual look. 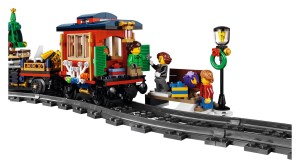 Just next to it, a small compartment with lots of gifts will surely put the two kids completely excited! Finally at the back, there is the small passenger carriage. Outside, it keeps the same Christmas style of the other elements and inside, it has the necessary space for a couple of seats and a small table with some drinks. In terms of playability I think that the access couldn’t be better, not only because it has doors on both sides but also because the roof detaches easily. 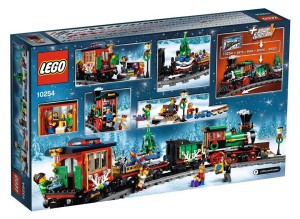 Overall, it’s definitely a must for the Lego train fans. The Holiday train is awesome in terms of beauty as well as if we attempt to its playability and the mini-figures are in good quantity, according that we’re talking about a creator set. In terms of price, as usual, it’s not cheap and should retail around the hundred dollars which looks fair according to the piece count. The new Holiday train should arrive to stores next October and until then have a look at the official press release and designer Video:

Gather the family for some festive LEGO® building fun with this charming model featuring a full circle of track, boarding platform with bench and lamppost, a Power Functions upgradable train engine with brick-built smoke bellowing from its stack, coal tender, flatbed wagon with a rotating holiday tree, toys and gifts, and a red caboose with a detailed interior and table. The train engine also features large and small red-colored locomotive wheels and the train is decorated with green wreathes, string lights and white tree elements. This LEGO® Creator Expert set includes 5 minifigures.

Decorate the tree and drive the train to see the tree rotate.

Join the ticket collector in the cozy caboose for a delicious cup of cocoa.

Upgrade with LEGO® Power Functions (not included) for a motorized engine.

This set includes over 700 LEGO® pieces, including 16 curved tracks.