One of the most exciting 2014 Lego sets has been unveiled yesterday in Sydney, Australia. The Fairground Mixer is a new Creator Expert Set with more than one thousand and seven hundred pieces that features a really nice fair with plenty of beautiful and colored elements, two trucks and twelve (!!!) Mini-figures: : 2 women, 2 girls, 2 boys , a juggling man on stilts, a dunk tank lady, strong man challenger, the ticket lady, a truck driver/ride operator, and a queasy man.

The new fair is absolutely amazing for several reasons but for me, the best, is that it is completely portable being the two trucks capable of loading all the elements and moving them from one side to another just like in reality.

The big truck brings at the back a big carrousel, built with three different color shades, with seats for twelve guys, which once built are easily ready to play with, even if it’s already tidy in the trailer. And the best part is that, alternatively to the manual mechanism that is triggered with a long brick, a power functions kit can also be added giving the carrousel an even more real look.

At the front, the truck seems pretty similar to so many other city trucks, however if we look closely that are a couple of major details that make it quite unique, such as the new doors, the double windshields with the wipers or even the new steering wheel. Besides these, the vehicles seem to be built with many small elements and some technic parts which will ensure the ideal attach mechanism to the big trailer. The cab which has a big removable roof has also, just behind the seats, a nice bed with a flat TV in the wall. 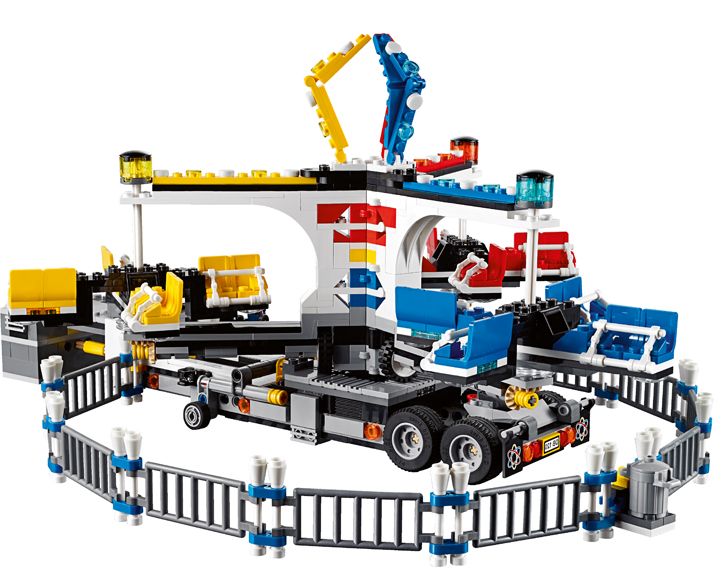 The smaller trucker is also quite detailed and is responsible to carry the two stands, one for the selling tickets and other with a dunk tank. At the front the cab seems similar to the usual city vans, but all around it is clear that the vehicle has much more details and small bricks than the regular vans.

Once the carrousel is unloaded, a very long fence which is also transported in the big trailer just at the back, can also be mounted, becoming a really safety protection to the other people when the carrousel is on movement. Beside the big attraction the set also features other extra elements such as the spoken fair stands, a high striker with two mallets and the man with the big stilts.

Overall if you have many to spend, this is definitely a must not only because of its beauty (it is extremely detailed and with plenty of different colors) but also because of its great functionalities which are absolutely outstanding. The set won’t be cheap, it will probably retail around the two hundred dollars and will be available after June. Have a look at the gallery, the press release and the official video, right below:

Climb aboard the LEGO® Fairground Mixer and hold onto your hat!

Unfold the awesome Fairground Mixer, turn the crank and see it come to life! The fair has come to town and children and adults alike can’t wait to try the rides. Buy your ticket from the ticket booth and climb aboard the Mixer. Then try reaching the golden bell on the high striker or hit the target to plunge the dunk tank lady into the water. As evening falls, the swirling Mixer ride glows in the darkness, before being folded down onto its own trailer for transportation to the next town. This magical fairground is packed with wonderful details that will capture everyone’s imagination. Includes 12 minifigures: a juggling man on stilts, dunk tank lady, strong man challenger, ticket lady, truck driver/ride operator, 2 women, 2 girls, 2 boys and a queasy man who tried the mixer one too many times.

Enjoy the magical atmosphere of the fairground with the LEGO® Fairground Mixer, packed with exciting features and imaginative details.

Enjoy the fun of the fair!

June 2014 via shop.LEGO.com and LEGO® Stores