Simply outstanding, this is possibly one of the most majestic creations that Lego has ever made in its history! The new Sydney Opera House has almost three thousand (!!!) pieces, will cost (prepare the wallet!) around three hundred and twenty dollars and will be on stores in the next September.

The building is definitely quite long, measuring 63,5 cm wide and all around the details are simply perfect. At the first glace, the white sails are in my opinion the feature that highlights from all the rest, for several reasons: they have a complex structure, they are quite unusual and if we look carefully they’re made with several small bricks which is definitely exciting in terms of building.

In the presentation video we can also see that the entire structure is quite sturdy, mostly thanks to two major details: the Opera House is built in sections and then attached in the end thanks to a big technic piece structure that provides the entire house a total resistance that allows it for instance to be upside down 180 degrees without problems (but it’s better not to try it). 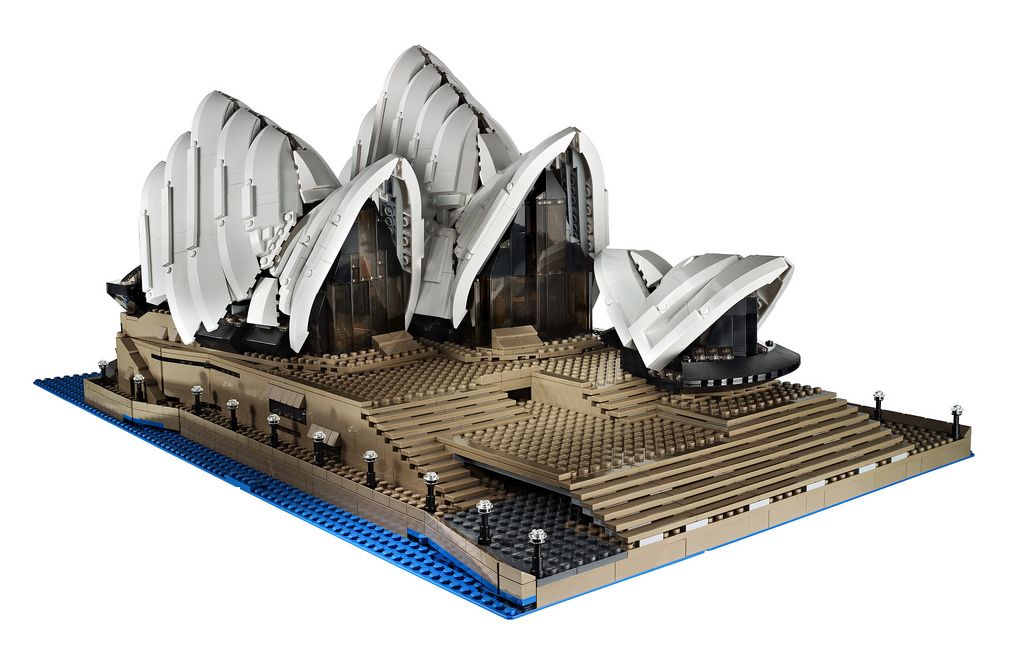 The big brown stairs that will lead to the opera House and to the concert Hall (the bigger one) have a perfect color shade and recreate most of the details of the original Australian building. All around there are also many little black lamps and finally at the back (if there is a back part…) the glass balconies give the guest a terrific view all over the water.

Please have a look at the presentation video,

and to the official press release and extended gallery in the end:

”The famous Australian landmark is the latest structure to be added to LEGO® Creator Expert range. The set contains nearly 3,000 LEGO bricks, and will launch in September.

The LEGO Group is set to pay homage to one of the greatest buildings of the Twentieth Century when it debuts a striking new official Sydney Opera House model on 1 September 2013.

The construction skills of LEGO fans from around the world will be put to the test as they recreate the unmistakable rooflines and complex angled walls of the Opera House using advanced building techniques and a total of 2,989 LEGO bricks.

Scaling 28cm high x 63.5cm wide x 38cm deep, this authentic representation of the Opera House will even stay true to its iconic harbour surrounds with the introduction the LEGO Group’s largest blue stud baseplate ever along with an abundance of dark tan LEGO® bricks including the rare 1x1x2/3 stud and 1x2x2/3 stud slopes.

The Opera House model joins the LEGO Creator Expert product range, which has previously seen the likes of the Taj Mahal, Eiffel Tower and Tower Bridge immortalised in LEGO® bricks.”

Recreate one of the 20th century’s most distinctive buildings with the Sydney Opera House model  Build the unmistakable shell roofline, waterfont forecourt and more with this authentic representation of Australia’s most iconic building.  Employ a variety of new and advanced building techniques to recreate the complex forms, angled walls and subtle detailing of the real thing! Collect lots of dark tan LEGO® bricks including the rare 1x1x2/3 stud and 1x2x2/3 stud slopes, as well as a 48×48 stud baseplate in blue for the very first time!