The Palace Cinema is a new Modular building from Creator Expert that will be released this year. The set, besides the majestic building, has also six (and not seven as I wrote in a previous post) mini-figures (which are a barman, a photographer, two ladies, a guy with a cowboy heat and the limousine driver) and a great black convertible limousine.

The Palace has two floors, each one of them with awesome details, and a roof with a large terrace. Unfortunately the set is not available yet, but through the pictures we can see that in terms of building, the palace is clearly built separately in three elements (the two floors and the roof) and then joined at the end. This is quite understandable because the access to the interior is much easier and it surely increases the playability. 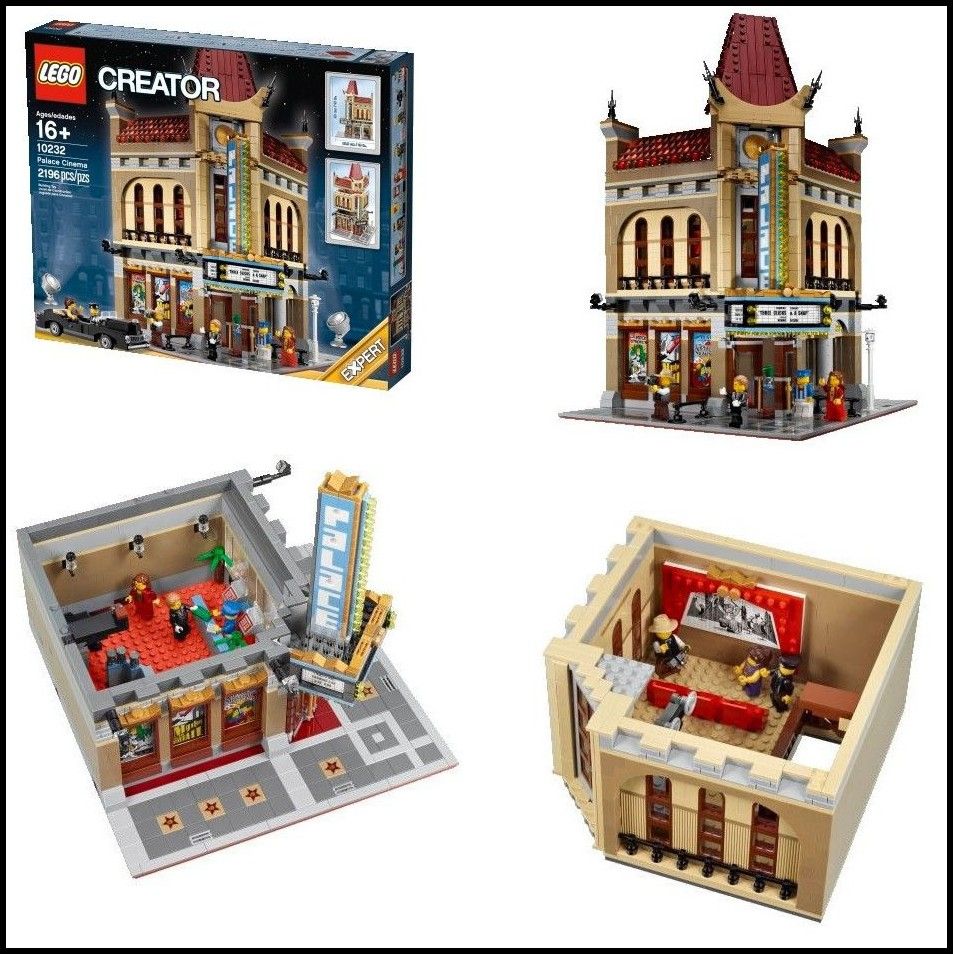 The ground floor is built on a red plate  and basically has a nice bar at the entrance with a register and some flowers, and in the opposite corner there are some black ladders that will lead to the first floor. Outside the walking street is considerably large with a length of 32 studs and 8 studs wide. It has great details such as the star pieces, the little sewer grids, a nice white street lamp and even two big white spot lights.

The tall windows have on one of the building fronts, three big presentation cartoons of some movies that, unfortunately, appear to be stickers and on the other side two big glasses give this floor some inside clarity most of all when all the structure is mounted. The entrance is simply superb and surely remembers the old century cinemas outdoors. On the opposite corner, there are two big glass windows that announce the ticket selling.

In the first floor, there is the old 60’s cinema properly. It has six nice red seats symmetrically distributed and at the back, it is placed an old projector that will be responsible for the movie play on a big screen at the front wall. To complete the background this big screen has some red curtains aside.

Going up, the roof has a big balcony which is accessible through a black door. Through the pictures we can see a normal door which I don’t understand its presence – not of the access itself but of that used brick – , because instead of the door there should be another type of trapdoor. Forgetting that details, the roof is simply gorgeous made with many small red pieces and a nice tall tower.

Finally, there is a black limousine that could surely enter on the monster fighter’s theme. It has a large engine, thin wheels, a great cockpit not only for the driver but also to the passenger and a bunch of style that make this car a unique vehicle among the vintage cars. Globally, I reinforce what I said previously, this is surely a must for any town and the only thing that truly worries me is the expensive price that it will cost. Have a look at additional pictures: