What a tremendous set, worthy to belong to any kind of town or village, no matter how many fire vehicles or hospitals or firemen headquarters exist. This is simply a must that deserves all the effort. With more than two thousand and two hundred pieces (!!), it has a fire headquarters typical of the first half of the last century, a fire vehicle where the beauty is proportional to its age and four mini-figures (three firemen and a civilian). 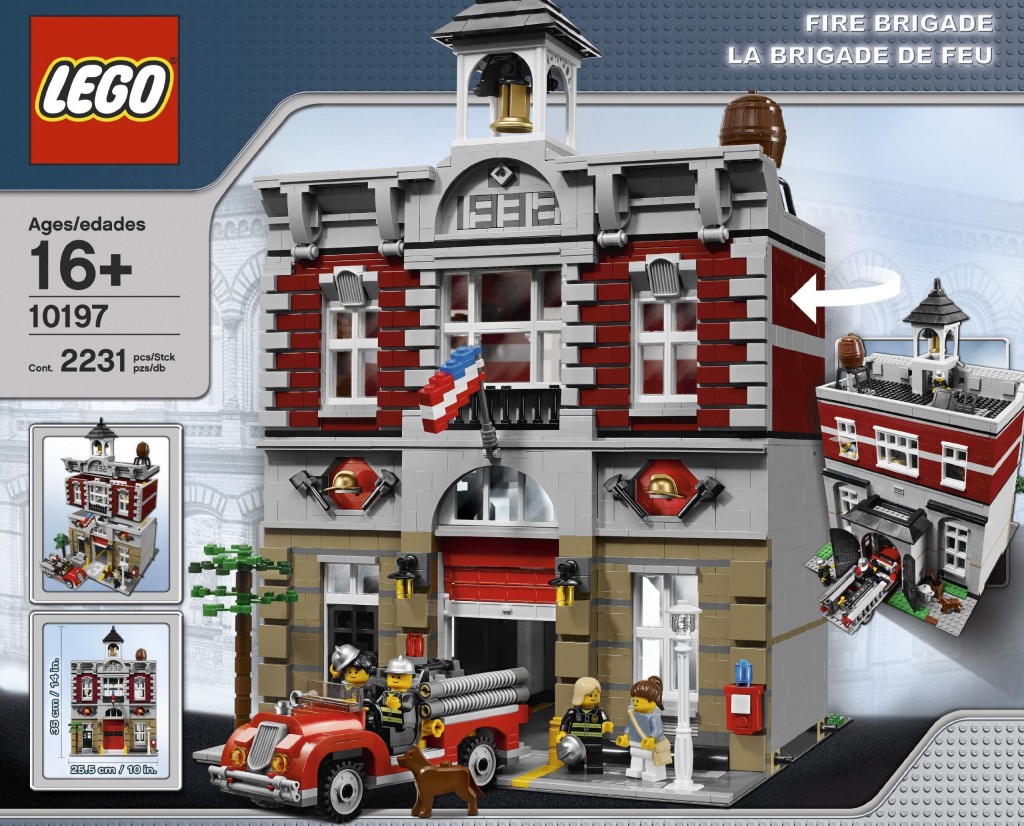 Before talking about the building or the truck, I must say that the outside area are has been carefully planned. There are plain sidewalks, trees, a nice street lamp, two lamps on the walls and on both sides there are also two technique pins in order to attach the building to another modular and give them the necessary stability. Everything is planned and prepared to build everything and then place it on an empty lot of a city’s street.

Talking about the truck, its esthetic is very unusual and just for that it is definitely an added value to the town. But when you starting building it, you will notice that there are many differences when it is compared to the usual city trucks. The engine’s hood is longer that usual, the cab has two seats (side by side) for the firemen, there is no roof or doors in the cab, and the big trunk has enough space not only for the third fireman but also for the bunch of fire tools and the hoses. Its wheels are also slightly bigger than the usual ones. 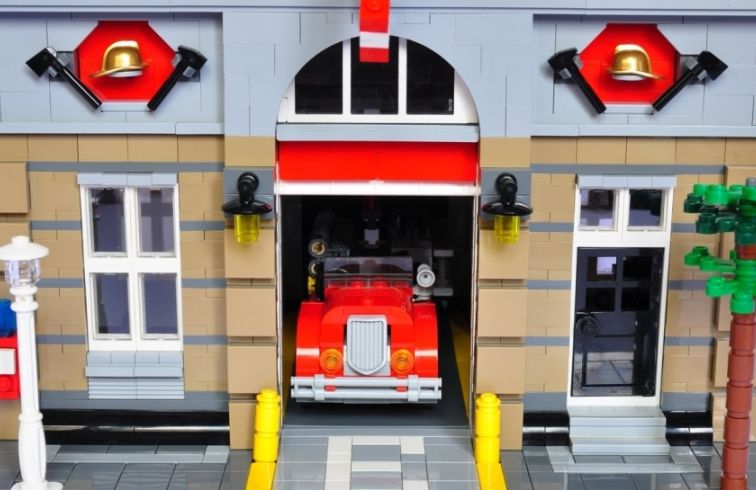 Now, the tall building. Two big plates conveniently attached to each other constitute the base of such magnificence. On the ground floor, there is a central track, properly marked for the truck’s maneuvers. Not only this vehicle but also many others are capable to enter easily inside the garage, so in terms with interaction with other sets this fire brigade has a high score.

Both ground floor edges are typically a fire headquarters with plenty of places to store all the equipment. But one then has an extra feature, the stairs that will lead up to the first floor. This one and the roof are built separately and will have to be carefully attached to the rest of the building. 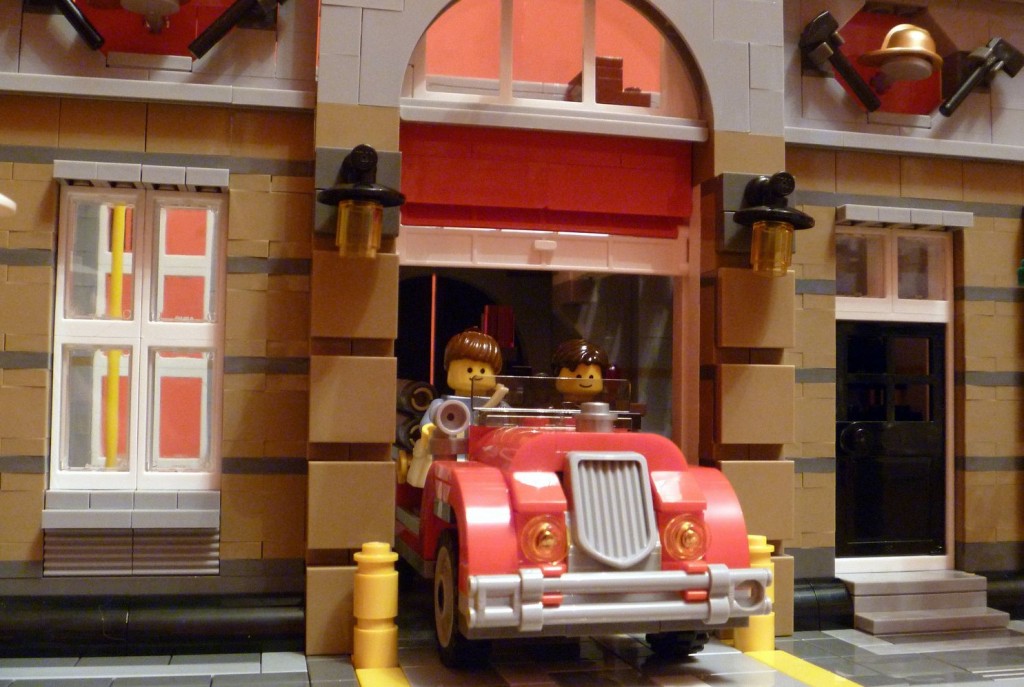 Here there are all the firemen quarters with all the comfort and diversion that they need. And the features are tremendous: there is a table tennis table, a nice couch, a small kitchen with all the indispensable equipment, including a hose, and also a considerable refrigerator. Besides the access stairs, there is also an old tube, where the guys slide down to the ground floor in case of emergency.

Looking at the building’s façade the bunch of nice details continues. There are many windows all around the building, side doors, next to the big entrance, and talking about this one there, at the back another one in order for a better access of the vehicles. The back doors is quiet usual in the city sets and is similar to all the police or fire buildings. Finally the outside axes, the flag, the water deposit and the bell at the top are surely the cherry on the top of the cake in terms of beauty. 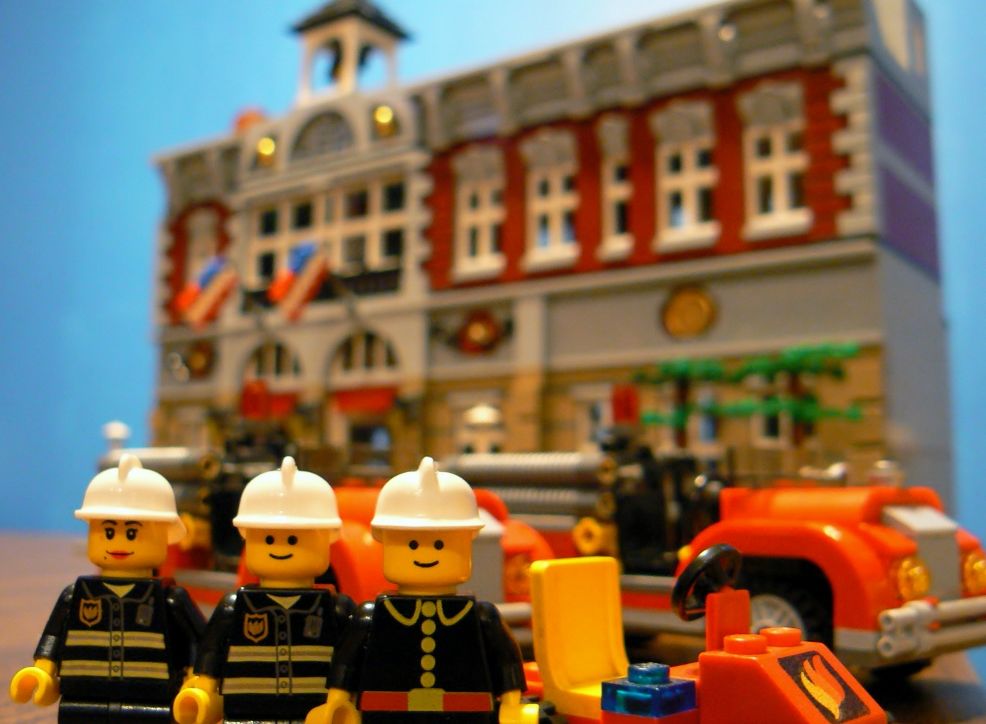 Now the price, hundred and fifty dollars are quite an amount, but the set surely worth the effort. And if we look at the two thousand pieces, proportionally, it doesn’t look a bad price. If necessary the instructions can be downloaded right from here: