The Batmobile is the last exclusive set of 2014 San Diego Comic Con.  With hundred and fifty two pieces it features a 1966 Batmobile version with two mini-figures: Batman and Robin wearing their classic 60 suites.

At the first glance, the set doesn’t look much pretty, far away from that, remembering the juniors set not only because of the vehicle but most of all thanks to the figures. The vehicle, built mostly with black and red shades is considerably large (eight studs), having two separate cockpits just behind the long hood. The wheel axes too close to each other, definitely doesn’t help to improve the vehicle’s aesthetic, making it too much “juniorized”. 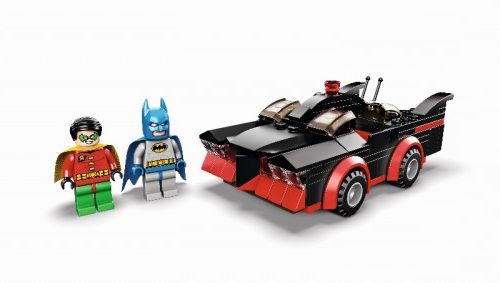 This limited edition will retail around the fourty dollars in a total of 1000 units, 250 on each day of the event.

One thought on “Batmobile – The last SDCC exclusive set”