Six new Mighty Micros will make part of the first 2017 Super Heroes wave of new sets. Three of them were already revealed a few days ago and now we can see the other three. The new Marvel Micros are Wolverine vs. Magneto, Spider-Man vs. Scorpion and Iron Man vs. Thanos that join Batman vs. Killer Moth, Wonder Woman vs. Doomsday and Superman vs. Bizarro for DC Comics.

This targeted subtheme doesn’t usually impress me much but I must agree that some of them look really cute. Iron Man vs Thanos looks really cool and generically all the mini-figures looks rather pretty.

This new wave of micro sets will be available in the beginning of 2017, perhaps a bit earlier for Christmas. 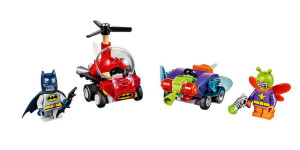